Blast(beat) from the Past: Asshole Parade 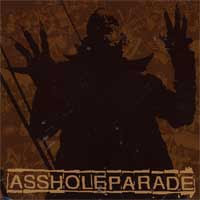 Asshole Parade
Say Goodbye
No Idea
2005
Where does power violence end and fastcore begin? Is there even a difference? Man is the Bastard gave us power violence, but Max Ward, who anchored some of the earliest practitioners of the sound, prefers the term fastcore. I generally lump Capitalist Casualties in with power violence (sorry, Max) while I can definitely see where the term fastcore would apply to someone like Threatener.
Philosophical maundering on the shoals of pointless semantics aside, Florida’s Asshole Parade refer to themselves as fastcore, but they can hold their own with just about any power violence band as well, perfecting that never stale adrenaline rush of punk tunes blasted at speeds just shy of a blast beat on Say Goodbye.
Attempting to break the four minute mile in punk form, Asshole Parade rarely cross the sixty second mark as they blast through pit starters like “Puncture the Quiet Life” and “Mr. Rippington’s Revenge.” Even the Circle Jerks classic “Red Tape” gets a nice and thorough beatdown, complete with harmonica solo and sublimely cynical Keith Morris sample.
Oh sure, in true power violence/fastcore fashion there’s the occasional swamp water sludge foray like the barely repressed violence of the ominously looming “Through tha (W)ringer,” but that’s just an early album respite, a deep breath before sprinting through the remaining songs.
Fastcore? Power violence? Whatever the fuck you wanna call it, Asshole Parade do it pretty fucking well.
Posted by Andrew Childers at 6:49 PM

Awesome band. They're doing their last set of shows soon, one in D.C. and another in Baltimore in August. You going?

I need a Riddle ASAP! i know this sounds extreamly werid but i need a riddle. Dont ask why just give me something!! thanks!