G&P Review: Success Will Write Apocalypse Across the Sky 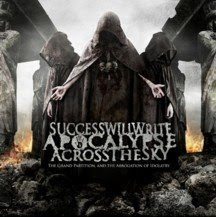 Success Will Write Apocalypse Across the Sky
The Grand Partition and the Abrogation of Idolatry
Nuclear Blast
If nothing else, before I sliced the shrink wrap off of The Grand Partition and the Abrogation of Idolatry, Florida’s Success Will Write Apocalypse Across the Sky had already notched a fairly significant achievement: making me give a shit about a Nuclear Blast album for the first time since In Flames dropped Clayman nearly a decade prior.
But even that achievement pales when you realize every aspect of SWWAATS’s full length debut has been honed to lethality by precision death metal craftsmen with an added boost of Sunshine State death cred courtesy of producer James Murphy.
Guitarists Aaron Lee Haines and Ian Sturgill put the spazz in freak-core unit Bodies in the Gears in the Apparatus, but like their former frontman Joshua Vitale (who briefly belched life into tofu grinders Khann) the six string duo go for something meatier and more visceral and menacing than BitGotA’s light footed trickster rhythms. Unfortunately, they didn’t leave the prior band’s wordiness behind, though. “Automated Oration and the Abolition of Silence,” the album title and even the band’s name all suffer from a bad case of abomination of unnecessarily augmented composition monickers.
But I quibble because SWWAATS have developed one of the most intriguing personas currently working in death metal. From the snake handler freak show lyrics to Colin Marks’ robed menace art, SWWAATS conjure the same mystique that cloaked the earliest incarnation of Cancuckleheads Kataklysm. Lead off track “10,000 Sermons, 1 Solution” interweaves wailing Eastern melodies through the chunky death metal foreground.
Though the chunky death metal is the star, SWWAATS give sample swiper Jen Muse her moment to shine on the audio pastiche of “Retrograde and the Annointed.” SWWAATS also cleverly subverts doom cliché on death crawl “Colossus,” the shortest song on the album that clocks in on a respectably grind-paced 90 seconds.
My only other -- extremely minor -- complaint is frontman John Paul Coollett II's roar -- as visceral as it may be -- could have used a better supporting cast to provide some texture.
More than a tribute of Florida metal days gone by, The Grand Partition and the Abrogation of Idolatry is a vicious resuscitation of a near-moribund sound retooled for the 21st Century.
Posted by Andrew Childers at 7:31 PM

whaaaa? i respect your opinion so you care to elaborate?

sample swiper....
why pick on her??
did you even hear that secret track man??

it was said purely with love.

too bad she isnt in that band anymore...they are gonna suck now!

and apparently the only good guitar player in that band isnt in it either...
I only say that from seeing them live in tampa, one guitar player is amazing and the other one just seems to get by...and not very well at that...
A shame...I really liked that album!
*looks for the next best thing with a hot chick samplist with a mohawk*...
any suggestions???? ;)

sadly female keyboard rockers seem to be the exclusive province of really, really, really bad mtv-ready metalcore bands.
though it would be awesome to see that become a fixture of grind and death metal.

amen brotha...we need more hot chicks on the stage actually playing the music!
that chick had a case full of shit though, like a laptop and i think a sampler box thing and what looked like a mixer and a midi controller, it was sick!

for far too long the laptop/sampler has been the keytar of death metal. all hail the sample swipers!

Hi!!! grindandpunishment.blogspot.com is one of the most excellent informational websites of its kind. I enjoy reading it every day. All the best.

The author of grindandpunishment.blogspot.com has written an excellent article. You have made your point and there is not much to argue about. It is like the following universal truth that you can not argue with: When annoying people do something often you will eventually find this activity annoying as well. Thanks for the info.

Just wanted to add that the aforementioned guitar player/sampler is back in the band, and the guy that "just gets by" is not.

I was glad they got rid of the ugly fat chick. Now the chick that played guitar for them on the C&C tour last year was more like it. And she could shred too.. Wish that lineup would've stuck. wish they would put something new out as well..

YOU ARE CRAZY DUDE!
that chick wasn't fat or ugly!
and she is still in the band too as far as I know.
she's hella hot and had a killer mohawk and could actually play her (multiple) instruments!
I am pretty sure the skinny girl on guitar (who I think was no where near as hot as the mohawked sample chick) is from a band called Gigan and she was just filling in on the Goatwhore tour.
I wish they would come out with some new shit too.
and tour again!
I love grand partition it's fucking brootal!