All Your Bass Are Belong to Us

Raise your hand if you’ve had this happen to you (or if you’ve done this to someone else). A bright, eager young metal fan burns with a passion to play music, but, sadly, lacks any musical training. What instrument do you hand them? Bass, of course. (Not that I still hold a grudge or anything, guys.) Metal is full of shred heads, drum gods, and vociferous front men, but aside from the occasional DiGiorgio, bass as a whole does not command a lot respect. Especially in grind. Insect Warfare, Discordance Axis and pretty much any band to feature Scott Hull have gotten along without a four stringer crowding the van and clamoring for a cut of the profits. But such wasn’t always the case. So in no particular order, we look back fondly on some of the greatest moments featuring grind’s least favorite instrument. Solo Effort
Nasum were just one of dozens of grind bands that got along swimmingly sans low end for two awesome full lengths until they swiped bassist Jesper Liverod from the idle Burst (who are once again idle) for masterwork Helvete. Liverod’s presence brought additional depth and contrast to Miesko Talarczyk’s godly riffing, bolstering songs like the sandman murk of “The Final Sleep.” While Nasum will always be remembered as the axis of Talarcyzk and drummer Anders Jakobson, Liverod, who would depart just as quickly as he entered, commanded his own space on Helvete, particularly at the 2:02 mark of “Scoop.” Not too many other grind bands would have the vision or the balls to close out the second song on an album with a full on bass solo. 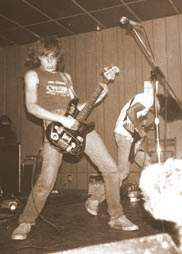 Festerday’s News
Scott Carlson was a busy guy in seminal grinders Repulsion, not only mortaring a foundation for Dave “Grave” Hollingshead’s embryonic blastbeats and Aaron Freeman and Matt Olivo’s rusty scalpel riffs, but he also had to puke out the band’s grave robber lyrics at the same time. His sneering vocals balanced both power and clarity, setting a standard a metric butt ton of lesser gorehounds are still emulating. But Carlson wasn’t just the guy at the mic. His greatest musical contribution comes within the first 10 seconds of “Festering Boils” as a roiling, suppurating bass tone snarls through the opening bars. Though as a song “Festering Boils” may not be as strong as “Maggots in Your Coffin,” “Radiation Sickness” or “The Stench of Burning Death,” that fuzzy, overblown bass sound would become a hallmark, endlessly aped (hello, Jeff Walker) for the next two decades. 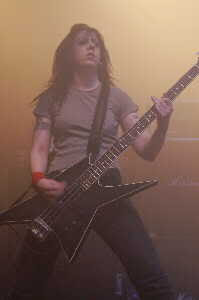 Bench Pressed
While I don’t really consider Bolt Thrower a grind band, per se, only a fucking moron is going to deny First Lady of Metal Jo Bench the props she’s fucking earned. She casually shattered the extreme metal’s gender barrier with a flick of the pick and managed to do it without really making it seem significant. Unlike the current wave of metal women being pushed by the major labels, Bench established her space without trading on her sexuality. Bench’s success does raise an interesting question though. I say this not as a name dropping douche, but Drugs of Faith’s Richard Johnson was recently telling me about meeting Bench at the Maryland Death Fest (it came up because I’d likened his S.O. and bandmate Taryn Wilkinson to the Bolt Thrower bruiser). With the exception of god awful “operatic” singers of shitty goth metal bands, if you find a woman picking up an instrument in rock or metal, chances are pretty good it will be bass. Sure there are obvious exceptions (Angela Gossow, Garden of Shadow’s Mary and God Dethroned’s Susan Gerl), but more often than not it’s bass. What up with that? Is it the few extra inches on the neck? Does size really matter? 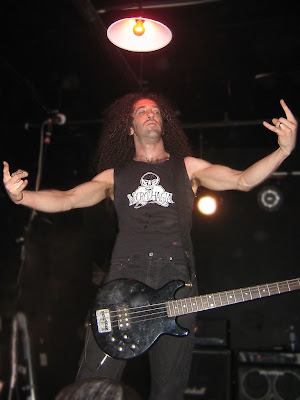 Brutal Exit
Nobody likes being fired, but there’s no greater revenge than success. Danny Lilker is a living legend in metal, but in 1984 he was just the unemployed guy who used to be in Anthrax. Where some would take that as a sign to check the help wanted ads for joe jobs, Lilker just went on to found innovative thrashers Nuclear Assault with fellow Anthrax castoff and popularize crossover in S.O.D. Oh and he dabbled in grindcore with a couple bands you may have heard of – Brutal Truth and Exit-13. By 1990 grindcore was already ossifying. Terrorizer was gone and Napalm Death and Carcass were both grazing in death-ier pastures when Lilker and Brutal Truth shoved a weed-drenched enema of unbounded experimentation up the scene's ass. Brutal Truth combined relentless brutality with forward thinking music and a host of outré influences while Exit-13 plowed even further through fog banks of pot smoke into a land of jazz, grind and death (the skipping plucked bass of “Societally Provoked Genocidal Contemplation” should make Lilker’s career highlight reel). It’s that restless sense of experimentation that has constantly driven Lilker to innovate and that makes him such a vital metal presence. Sure Anthrax may have millions of dollars and a guest appearance of Married With Children to their credit, but does Scott Ian have a place in the Guiness Book of World Records? (The 2.18 second-long clip for Brutal Truth’s “Collateral Damage” claims the honor as world’s shortest music video.) That’s got to count for more than appearing in Vh1’s I Love the 1930s Part 12. 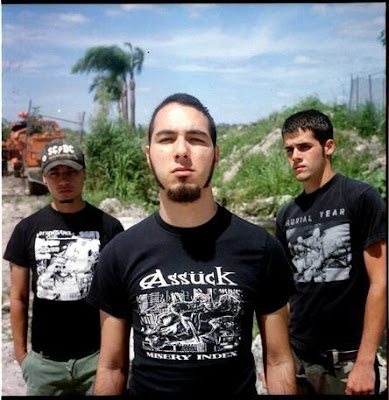 None More Vile
Oops. Not actually a bass, but still grisly as all shit.
Now I don’t want to sound like one of those aging, bitter assholes who think everything was better back when Digby Pearson was ripping everyone off and grind ceased to be relevant or interesting or innovative in 1987. We all know that’s bullshit. Case in point, new jacks Maruta ruled 2008. And despite not having a full time bass player on debut In Narcosis, the Floridian swamp grinders made a very significant contribution to the bassical arts. Tee up “Demise of the Humanist” for one of the finest grindcore bass moments in recent memory. It’s the sound of Scott Carlson staying up all night with a case of PBR and bootleg snuff films. The sound is vile and molders over the song like a charnel house virus. Maruta use bass like a blunt instrument. “In Perpetual Narcolepsy” is like being teabagged by Polyphemus. That image disturbs me. I’m going to stop now. You go listen to Maruta. 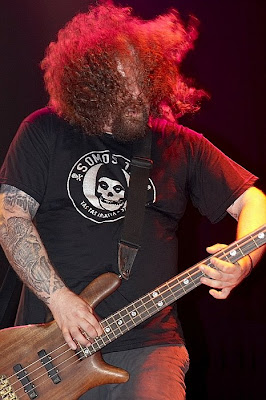 From Enslavement to Infatuation
From 1988 until today, Shane Embury has been the pivot of Napalm Death’s gyre. He is the grindcore center that has held for more than two decades.
The closest thing that passes for an original member in a band that has completely rotated its cast of characters, Embury is both the soul and conscience of Napalm Death. He’s also the greatest ambassador grind (hell, metal in general) could ever dream up. And he damn near missed his opportunity.
As the story goes, Mick Harris tried to rope Embury (then drumming in Unseen Terror) into replacing Justin Broadrick after he split following the first half of Scum. Though he bowed out in favor of Bill Steer, Embury would get a second crack at the band on bass, an instrument he was more comfortable with from his time in Warhammer and Azagthoth.
I can’t count how many times I’ve seen Napalm Death in my life, and without fail at every show I see Embury working the crowd before the band rips the stage. No matter how successful or how in (and out) of vogue his band may be, Embury is a tireless proponent of metal and has anchored Napalm Death through all of its member transfusions and stylistic upheavals. While I can’t imagine any frontman having the sack to step to Barney Greenway’s mic at this point, I’m convinced Napalm Death will only exist as long as Embury wills it. The day he finally calls it quits, that’s the day Napalm Death ceases to be.
Posted by Andrew Childers at 12:49 PM

Yeah I started out on bass as well. Of course it was because I was initially intimidated by its six string counter-part. But I think women back in the day might have been intimidated also into taking up the bass duty. But its good to see more females taking up the axe in bands like Kylesa and all the chicks in FID.

I always admired Man is the Bastard for making the bass stand out and become more appreciated in grind/pv circles.

I was wondering - how much do you like powerviolence? Just something that I'd be interested in hearing, speaking of MITB and all (or not, I guess. I mean, I love MITB but can't name a worthy band to compare them to in PV or any other genre).

Also, there's a fucking awesome tech-death band in Germany called "Pavor." I highly, highly recommend you give their album "Furioso" a spin if you're in for just about the fastest bass playing in metal, courtesy of Rainer Landfermann. I am not kidding!

You should have cited Delgado / Kill The Client. That band wouldn't even exist if he wasn't in it.

Delgado is a great producer as well.

Embury is the man...

Killer blog, it was definitely a good read!

Also, thanks for the kind words on Maruta... I must mention though, that there was absolutely no bass recorded on In narcosis or anything else we have done, just 2 guitar tracks. Our guitar player tunes down really low and uses a 7 string.

cheers and grind on
-M

maruta-- dammit. i almost didn't include you guys. i went back and forth on whether that was a bass i was hearing or whether or not that was one seriously fx-ed out guitar. ah well. it was low as hell and sick as fuck so it stays on the list.

z/apoc -- i deliberately didn't include mitb because it seems like pv bands have always really respected the power of the bass while grind has treated it as optional. but yeah, frightening bass from those guys.

haha, its all good Andrew. Thanks for the kinds words and for including us anyhow.

Shane's intros to both 'Lucid Fairytale' and 'Retreat to Nowhere' are probably the most brutal pieces of bass playing I have heard in my 43 years of being on this shithole planet.