Blast(beat) from the Past: Deathbound 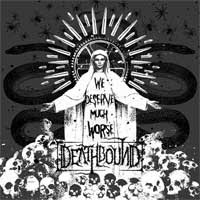 Deathbound
We Deserve Much Worse
Dynamic Arts
2006
Like Potter Stewart and his pornography, I don’t think I’ve ever come up with a definition for grindcore that would survive any serious scrutiny. I just know it when I hear it.
It’s a given that the blastbeat is a central tenet of the sound, and I usually describe grind as “the bastard child of punk and metal” for those who aren’t currently scene cognoscenti. But that’s a hazy approximation at best, and any attempt at more specificity is bound to implode. At what point does fast punk and hardcore cross into grind? Some people lump Disrupt in with grind, but I consider them punk due to the paucity of blastbeats. Not that I could defend that assertion with anything approaching empirical measurements. Same goes for the metal influences. Where’s the demarcation between grind and a really short death metal song loaded with blastbeats?
My taxonomical dilemma (and yes, I’ve had this dilemma of categorization before) is brought about by Finns Deathbound who pound out savage metal-flecked punk riffs on third album We Deserve Much Worse (a fourth is currently in the works) but are far more strategic in deploying the blastbeat. Former Rotten Sound drummer Sami Latva can bring the noise but songs like “Deceiving Shortcuts” find him picking his spots, using blasts as gravy instead of the protein in Deathbound’s culinary holocaust. The sandman somnambulance of “Connected to the Confusion” slinks through gray mists just under blastbeat BPMs and close out ECT session “Ward 77” is a booted bass stomp that validates the less speed is more approach by giving the low end a chance to resonate and crush the song.
Dropping the BPMs requires some guts because you can either end up with Leng Tch’e’s intriguing decision to swap speed for atmosphere on Marasmus or the stale elevator fart disappointment of Coldworker’s Rotting Paradise. Both Justice Stewart and I agree that Deathbound is much closer to the former, if that helps.

So how about it, is there a workable definition of grindcore that manages to includes all of its offshoots? How would you define it?
Posted by Andrew Childers at 7:20 PM

Fusion of crust and crossover employing abrasive riffs and blastbeats.

Talk about love and hate. This album has those "MTV-core" tendencies that piss me off, but some great riffing and song writing inbetween.

we're getting close but where's the line between grind and death metal? how much metal influence is acceptable?

also see what you're saying re: deathbound. i keep expecting that band to do more. they show flashes of brilliance and swaths of mediocrity.

Little double-picking in grind, while it' a DM staple. This also speaks back to the crust/crossover roots.

Strange no one else chimed in...

sayyadina and cyness both use quite a bit of double picking, but in more of a euro-blast metal style. and i'm gonna be writing about keitzer in a couple of weeks, who definitely come at grind from a death metal mentality-- double bass and death riffs all over.
that's why i said i think it's a real conundrum. i can't form a solid definition of grind that would encompass all of its offshoots.
to paraphrase the stones, i know it's only grindcore, but i like it.

You got me there. Modern grindcore seems a gestalt of extreme metal. That might be fitting in itself.

sounds good enough to me. i've actually been going over this in my head for a couple of weeks and i can't come up with a good answer.

one crucial thing for me to call it grind are the riffs, and obviously the blast beats. If it doesn't have those punk style riffs, that's when I feel it leaning towards death metal or something else. In an article in decibel, Scott Carlson described Insect Warfare's sound as a band of mosquitoes playing death metal. What about vocal style? Growls always seemed to be a more DM thing to me.

i came into grind via straight up punk -- think dead kennedys and circle jerks -- so it's always sounded like punked out death metal to me anyway. but this is an argument zmaj and i have had before. i think there's obvious death influence on modern grind, but he's a traditionalist like you who claims it has to be hopped up hardcore. and it's interesting perspectives like that that made me ask the question.

yeah, dead kennedys and black flag is where i got my start. From there i needed faster and heavier. I think about the dm/grind question all the time. it's hard getting my wife or anybodies opinion on things, so this question has been very refreshing.

and here i thought i was the only guy whose wife couldn't appreciate the vast subtle differences between phobia and catheter.

she won't listen to grind, but she can at least appreciate it for what it is.

Possibly at its most embryonic stage, grindcore was innocent of any death metal influence. Maybe the most purist strains really still are hardcore's logical conclusion.

But, I think most grindcore bands have at least a tiny bit of death metal to their sound. On the other hand, of course, grind made death faster and noisier (much the same way that hardcore kept heavy metal from getting lost up its own ass forever).

that pretty much sums it up for me. i enjoy iron maiden as much as the next guy, but i'd rather listen to sepultura's doublepicked hardcore any day. and sweden certainly benefited from having copious amounts of carcass and napalm death.