So just to clarify... 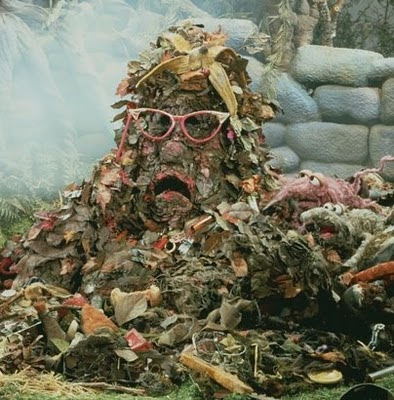 ... the mixtape I did for Invisible Oranges was "mostly ... garbage" but Earache sees fit to squander its legacy by afflicting us with vapid, nutless atrocities such as this. Which one of us seems to be wallowing in garbage?
I kid, I kid.
Sorta.
Anyway, learn the secret history of how G&P unwittingly played a humble role in Wormrot's well deserved new deal with the venerable, though no longer vital, grindcore label.

Thanks to Atanamar for the heads up. And as he pointed out, the punch line is Earache reps downloaded Abuse from Mediafire to check out the band. Way to respect those copyright laws, guys.
Posted by Andrew Childers at 5:44 PM

Fraggle Rock! Does that mean Earache are the Wembley of metal record labels?
"...nervous and pathologically indecisive."
For what it's worth I'm still enjoying and digesting the mixtape.
Also, congrats to G&P for helping get a righteous grind band a record deal.

I read that earlier today and it's been eating at me ever since. Fucking scavenger hasn't been relative in 20 years except to pop up with a re-release once in a while or rehash some shit that has already proved it will "push units". If that comp was such garbage, why would he listen to your opinion about the top grind record of last year?

I shudder to think of the contract those Wormrot kids signed in less than 2 weeks of the initial contact. Bands from third world countries sound like the easiest mark ever. Hopefully they at least get to tour or something.


And we all know you were there when Napalm and Carcass recorded their first records. SHUT THE FUCK ABOUT IT ALREADY. Every single fucking post on that blog he has to mention how groundbreaking he used to be and broke all these influential bands (and proceeded to rip them off).

We live a world where John Peel is gone but cockroaches like Pearson keep thriving.

i can't believe you're opinions on narcosis. althought eh vast majority of their output does sound rather poor quality the songs and the speed shine through.

live they were the best grind band britain had to offer and the six or so times i saw them never cease to amaze me. caustic and brutal whilst also being one of the funniest and punked up, drugged up, bunch of spazzes you ever encounter. i guess you had to be there "man"

check out the ergon carousel for an update on some of those cats are doing. the drummer is certainly still one of the fastest on the planet!

I'm happy for Wormrot, though.

*gasp*
don't say that, z. now you'll never be invited to the earache vip lounge at the next s00per XXXXXXXXtreme to the max wicked underground festival sponsored by scion (TM)

i would prefer somebody like willowtip to get ahold of wormrot...thats one of my favorite labels.

I don't care who it is so long as the next record "sounds" like Wormrot.

cosmo at i.o. forwarded me a rather kind email from digby last night. it almost makes up for him hurting my feelings. *sniff*

but i think "mostly garbage" will be my new slogan for the blog.

"99.9% utter dogshit" is narcosis's legacy. they said it so much better than anyone else could

Dig responded to my tweet about the download/copyright issue with this:

"@atanamarsunyata Not as ironic as this- the files I downloaded are now my company's copyright. I'm sure i could sue myself for it, and win!"
(http://twitter.com/digearache)
Um, don't know what to say to that...