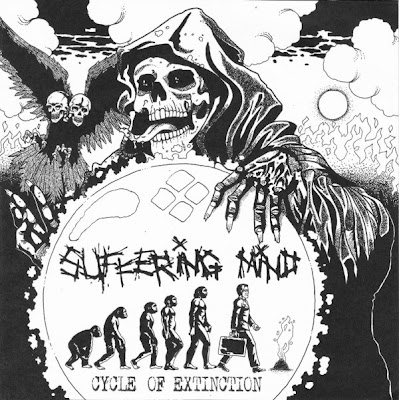 Suffering Mind/Lycanthropy
Cycle of Extinction/Too Late to Survive
Bullshit Propaganda
Not to jack Cosmo Lee’s shtick, but Napalm Death’s Scum turns 23 in March and we’re no closer to answering the band’s eternal 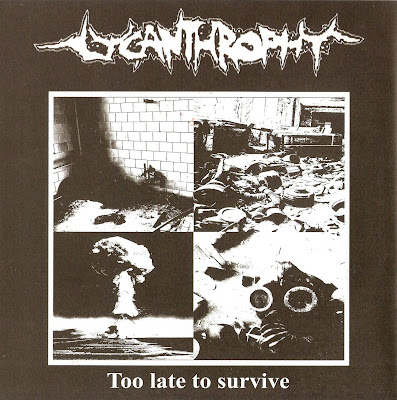 (though possibly, rhetorical) question: You suffer, but why?
Scoffing at such existentialist piffle, Poland’s Suffering Mind would probably blithely retort that it’s all in your head and then grind all over your face with gutter punk brutality. The band boasts their half of this split was “100% DIY recorded” and it shows. It’s a staticky, near incoherent, beautiful mess. Cycle of Extinction is one of those recordings that’s so low fi and unpolished it’s explosive. Suffering Mind surge off the vinyl with screeching, screaming grind that revs like a dental drill boring into a rotten molar sans anesthesia while Ula rips the plaque out of your ears vocally. There is absolutely no definition to any instrument on this atavistic little treasure, but it all works.
On paper there’s so many ways that Czech grinders Lycanthropy could have gone bad: a cutesy boy/girl band that evokes werewolves easily could have been a steaming slab of indefensible symphonic black metal that would have sent the Twihards swooning. These pitfalls would swooped over Indiana Jones style in favor of knuckledusting grind that, name aside, doesn’t really shift shapes. And that’s still cool.
“Two Sides to a Coin” is a snappy start/stop blast with a drum that sounds like an early machine gun clearing a trench in All Quiet on the Western Front while frontlady Zdisha works up a plausible strep throat excuse for work the next day. The remaining four songs are just as tight. Drummer Ondra is a real star here and the band smartly shoves his metronomic performance to the fore with a snappy, dry snare sound like a krav maga bone strike. Vosuck (guitar) and Supin (bass) are no slouches, but they clearly know their spot, providing seething, scarred foundation for the drums and scathing vocals to land the finer body blows.
Suffering Mind and Lyncanthropy are an inspired pairing, probably the best I’ve heard from Bullshit Propaganda so far. How good is this? I just ordered Suffering Mind’s full length and I’m on the hunt for anything else by Lycanthropy.
[Full disclosure: BS Propaganda sent me a review copy.]
Posted by Andrew Childers at 7:05 PM

and please excuse the fact that i somehow scanned the suffering mind cover backwards. i have no clue how i pulled that one off.

Lovely bands, both of 'em.

Liking this and the Wojtyla split. Now if I could only track down the Asshammer split. Just can't get enough of these guys.

selfmadegod has the asshammer split. i haven't ordered that one yet.

It sounds like SM recorded all the songs at the same time and divvied them out. I think the production on At War With Mankind does them far better justice but I like these splits.