Blast(beat) from the Past: Heresy

Heresy’s supporters can be distinguished by five indicators. First, there are those who visit heretics secretly when they are in prison; second, those who lament their capture and have been their intimate friends (it is, in fact, unlikely that one who has spent much time with a heretic remains ignorant of his activity); third, those who declare the heretics have been unjustly condemned, even when their guilt has been proved; fourth, those who look askance and criticize those who persecute heretics and preach against them successfully, and this can be discovered from the eyes, nose, the expression they try to conceal, showing hatred toward those for whom they feel bitterness and love toward those whose misfortune grieves them; the fifth sign, finally, is the fact that they collect the charred bones of burned heretics and make them an object of veneration.

Umberto Eco
The Name of the Rose
1980 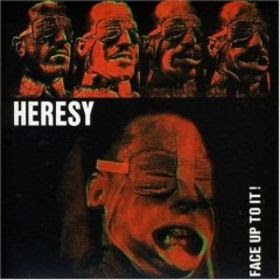 Heresy
Face Up to It
In Your Face
1988
The period between high school and college is full of transitions. Way back in the Pleistocene (aka the mid-1990s) I not only transitioned myself the hell out of my parents’ house and into the dorm, but I was also phasing my musical consumption from punk and aggressive thrash to a diet of grindcore, courtesy of a cassette borrowed from a friend (the TDK 90 minute tape being the file sharing of the era) that had Suicidal Tendencies’ first album on one side and something called Utopia Banished by the punk-sounding-named Napalm Death on the other. Having recently had my mind blown by Napalm Death’s back catalogue, I found Heresy's Face Up to It sitting in the $3 vinyl bin at the truly amazing Rebound Records (RIP). Recognizing the name from a plethora of album thank you lists (something I still rely on for musical inspiration) I plopped down a fiver (also finding Possessed’s Beyond the Gates in the $2 cassette section). What I blindly picked up was a landmark grind/punk classic from that era when Drop Dead became Scum (with just a tad of Gate of Doom crossover thrash for lube). This is classic pre-grind. Proto, if you will.
Punk girth and grind acceleration getting up in hardcore’s grill. Right off the top the band blasts and snarls its way through “Consume” while frontman John snarls like a surly, British Keith Morris. The title track is even more traditional hardcore, making those connections back to punk even more explicit, but dominating the album is the sprawling “Flowers in Concrete” flails through punk, proto-grind, spoken word and is that a hint of hip hop bounce in the middle? The intro riff is pure “Jealous Again” worship while much of the song could have been outtakes from an early Napalm Death rehearsal tape.
Art by pastiche luminary/Dead Kennedys collaborator John Yates and a grimy, gritty aesthetic round out one of the less discussed offshoots of the early grind family tree. I understand Boss Tuneage recently scraped some of the scuzz off the mix and reissued Face Up to It, but I can’t imagine why you would bother. It’s a beautifully punk mess just as it is.
Posted by Andrew Childers at 10:12 AM

Labels: blastbeat from the past, england, face up to it, grindcore, heresy, in your face

As Xrumer experts, we have been using [url=http://www.xrumer-seo.com]Xrumer[/url] fitted a wish leisure conditions and grasp how to harness the massive power of Xrumer and build it into a Cash machine.

We also provender the cheapest prices on the market. Numberless competitors desire charge 2x or square 3x and a destiny of the continuously 5x what we pervade you. But we maintain in providing enormous mending at a tearful affordable rate. The large point of purchasing Xrumer blasts is because it is a cheaper variant to buying Xrumer. So we train to abide by that mental activity in rebuke and provide you with the cheapest rate possible.

Not simply do we take the unexcelled prices but our turnaround occasion payment your Xrumer posting is super fast. We drive take your posting done in the forefront you know it.

We also outfit you with a ample log of loaded posts on contrary forums. So that you can see for yourself the power of Xrumer and how we get harnessed it to help your site.[/b]

Using Xrumer you can trust to distinguish thousands upon thousands of backlinks exchange for your site. Scads of the forums that your Place you force be posted on have high PageRank. Having your join on these sites can truly serve strengthen up some cover quality back links and as a matter of fact riding-boot your Alexa Rating and Google PageRank rating via the roof.

This is making your instal more and more popular. And with this inflate in popularity as superbly as PageRank you can think to lead your area really downright high in those Search Motor Results.
Traffic

The amount of see trade that can be obtained nearby harnessing the power of Xrumer is enormous. You are publishing your locality to tens of thousands of forums. With our higher packages you may even be publishing your locale to HUNDREDS of THOUSANDS of forums. Create 1 collection on a in demand forum last will and testament usually get 1000 or so views, with signify 100 of those people visiting your site. Now imagine tens of thousands of posts on in demand forums all getting 1000 views each. Your traffic liking go sometimes non-standard due to the roof.

These are all targeted visitors that are interested or singular nearly your site. Deem how innumerable sales or leads you can achieve with this considerable gang of targeted visitors. You are in fact stumbling upon a goldmine bright to be picked and profited from.

Remember, Traffic is Money.
[/b]

Oh shit. I just got text linked to me. I feel legit.

Nice write-up! I need to shore up the foundations of my grind collection at some point with more of the proto-stuff.

Also, if I ever started a thrash band we'd be called Xrumer.