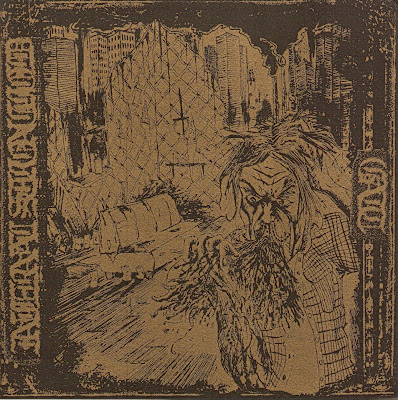 Infernal Stronghold/Gatt
Pests
Bullshit Propaganda
I admittedly don’t know much about black metal, but anybody who wants to drive trucks into churches while raging to ice pelted crust has got to be invited to my next party. After Godless Noise made me feel a little bad about all the shit I’ve talked about black metal, Infernal Stronghold strike back with an even more unhinged cross-section of crusted blackness that sounds like the distilled audio essence of Jack’s fate in The Shining. What’s most interesting about the three new songs is how they dip in and out of various genres, recycling their tropes for Infernal Stronghold’s only nefarious purposes..
The ever so polite “Excuse All the Blood” brilliantly works a pretty traditional hardcore riff until the miles away rasping reverbed vocals and blastbeats kick in. It’s a high protein prime cut of punk goodness that would have people grabbing change in another context. “They Let Their Guard Down” slips ’80s thrash a mickey on a slippery, serpentine mite of guitar noodling I think I remember from an old Sacred Reich album.
And then there’s Indonesia’s Gatt, who work pretty much the same shtick as Infernal Stronghold, only slightly slower and without as much grace. It’s not that there’s anything wrong with Gatt, per se, but when you’re the flip side of your style’s apotheosis, you tend to look a tad tinsel in comparison. Unlike Infernal Stronghold, Gatt actually allowed their singer to be in the same time zone during recording so there’s no echo, and in a concession to frail human flesh, they also turned the temperature up in the studio to keep their blood from coagulating in their arteries. But their songs are serviceable bits of blacked crust. The guitars are all snarly and indistinct, the drums are lost somewhere beneath a pond scum of distortion and the vocals are croaky and grim.
While Gatt are still out of their league, anything new from Infernal Stronghold makes this a worthwhile split to snag.

Thanks for taking the time to review my stuff. I'll probably continue to do so with my new releases too, as it's certainly more worthwhile than sending them to Short Fast and Loud.

there's some black metal that i like and there's some that bores the shit outta me. most of the black metal i listen to is either some old shit (dissection, bathory), some trendy shit (wolves in the throne room) or some random stuff that looks cool from the red & anarchist black metal blog (http://r-a-b-m.blogspot.com/)