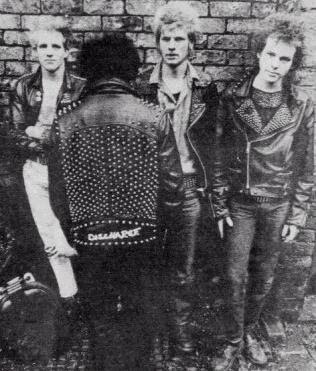 Punk and metal types have been meditating over that percussive koan for the better part of three decades now without exhausting the zen depths of the deceptively simple drum pattern.
I doubt Discharge could have ever foreseen the staying power of their signature sound 30 years ago when they were banging out crusty punk classics in a squalid London squat. Born of a punk frustration with rampant unemployment with no prospect of a better future under the velvet frocked grip of England’s Iron Lady (the Sex Pistols were not exaggerating when they wailed they had “no future”), Discharge, unlike many of their predecessors and contemporaries, distilled that hard scrabble frustration into 90 second screeds driven by one of the most infectious and propulsive punk beats ever devised.

But here comes my dilemma: for all of Discharge’s range and staying power over the past decades, they were not a band that I ever heard mentioned when I ran with bored, disaffected American suburban punks. In fact, it wasn’t until I got heavily into grindcore that the British progenitors ever got name-checked with any kind of regularity or reverence. For a band that’s been so influential – they spawned their own devoted, vibrant and ongoing cult of soundalikes, ferfuckssake – it’s a troubling lacuna in traditional punk circles.

Anti Cimex – “Victims of a Bombraid”

Perhaps that was just a function of the particular punk circles in which I traveled. (Keeping in mind, of course, we're dealing with a sampling size of n=1.) While we never embarrassed ourselves like some of our forerunners by busting out the Union Jack as a fashion statement, we were heavily into British punk: Sex Pistols, the Clash, Rudimentary Peni, Subhumans, Exploited. But no Discharge.

I have a deep, deep love for the Dead Kennedys, the first punk band to really capture my imagination and address my desire to engage real-world problems in a direct way rather than the generic sloganeering that characterized so much of punk and thrash at the time. Rivaled only by Rudimentary Peni, Jello and crew are probably still my favorite punk band. Generic claims to “stop war” and “fuck the system” just don’t have the same bite as calling out the perpetrators by name. But for all their influence, you don’t see DK's idiosyncrasies endlessly aped the way you do with Discharge.

I don’t know what it is about Discharge that has so captured our collective imaginations. There’s just something compelling about their simplicity and singlemindedness and it becomes blindingly obvious why they have such a hold over grindcore and the other punky, speed-obsessed fringes of the metal world. But those traits should translate to traditional punks as well.

Venomous Concept – “A Case of the Mondays”

Is my experience an isolated event, a strange confluence of influences and circumstances? Are there punk circles where Discharge are regularly given their due (outside of Scandinavia?)? My experience has been metalheads tend to be more open-minded about punk than the other way around, a strange inversion of where things generally stood during the crossover heyday of the late 1980s. Why does Discharge seem to have greater prominence among the metallic hordes than the punk throngs? Anybody got an answer?

Resistant Culture – “Hear Nothing, See Nothing, Say Nothing”
Posted by Andrew Childers at 6:55 PM

Keep in mind I wasn't born until Minor Threat broke up, but I think it has something to do with Motorhead. They have the punk/metal edge honed down very fine, same as Discharge, and Lemmy sporting Discharge shirts which only tells metal dudes "Listen to these guys!"

I forgot to mention that most bands I think have a Discharge ripoff also usually sound like Motorhead to me. Discharge has the d-beat but Motorhead has that guitar sound.

I didn't know about Discharge until 1990 when I saw someone from Napalm Death wearing their shirt in a zine. Harmony Corruption turned me on to Deicide, Sepultura and Obituary, so I figured they knew what was up.

maybe that's my missing link. motorhead has never lit my fire. i still don't get why punks don't talk more about discharge. amebix too.

if you're in a dbeat mood check out Dishammer, their name says it all. Modern day discharge/hellhammer worship. It slays.

Doom and Anti Cimex have always been favorites, goddamn they're good.

so it sounds like it's just a sampling size error. i ran with the wrong people in high school.

thanks for the tip, flesh

i'm not even gonna parse the difference between d-beat and crust. that's beyond my humble skills. but those first few anti cimex 7-inches were pure discharge worship.