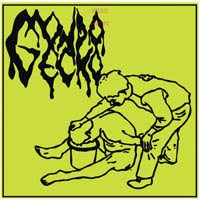 Mondo Gecko/D9
Split 12-inch
Urban Decay
Punk as all fuck.
There’s something truly zen about punk and hardcore. Like a deceptively simple koan, three chords and a chained wallet full of attitude bring an unexpected variety and complexity that have let this seemingly dead end musical offshoot flourish for three decades now without any sign of burnout or abatement. Wherever you find pissed off kids, you’ll find punk. Turns out there’s plenty of pissed kids in Israel as evidenced by this split featuring trad ’core punks Mondo Gecko and power violence purveyors D9.
D9 TA a master’s seminar in punk economy: songs are short, direct and played with the heft and bite of metal. It’s all Siege and Deep Wound worship as proto-grind/power violence get soldered to traditional hardcore. “Shapes Chasing Shadows” even cracks blast beat speeds occasionally, but also crushes some cyclopean stomp double kick action as well.

Then there’s the churning, deep mine drill bit of “Jigsaw Your Existence,” which is all cracking bedrock force and shrapnel shard screams chipping off hardcore intensity. On the vocal front, deep sea creepy crawler “Deep Abyss” boasts some grunts ’n’ gargles almost as deep as a Mariana crevasse.
Do you like Minor Threat? Probably not as much as Mondo Gecko who turn in the same declamatory outbursts as the venerable D.C. institution on their opening half of this split. “Brothers in Blasphemy” gargles glass over serrated guitars while “Blind Horse” boasts a bodyslamming bass groove and a break down (complete with gang vocals) counted off in …. Spanish? (Ummm.... OK). But Mondo Gecko’s amalgam of scratchy steel wool punk and ragged vocal desperation gets turned out to best effect on “Frozen Mountain”

This is a band that’s so desperate to make an impact the music careens on the razored punk edge between total implosion and feeding time at the piranha tank that gives it so much explosive urgency.
Punk as all fuck.

[Full disclosure: Urban Decay sent me a download for review.]
Posted by Andrew Childers at 7:15 PM

great review!
more samples of israeli hardcore-punk can be found at giorasftp.blogspot.com.

i sing in mondo gecko and in this case i will mention i speak fluent english, but i have no fucking idea what you are talking about man!!
do you like our split or not?!

thanks for giving time to review it btw:-)

shorter version: yes, i enjoyed it very much. sorry if my prolix prose didn't make that clear.