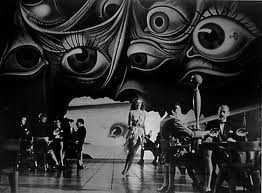 I. Eye. Aye.
J. Jay.
And so we hit our first hink in the process. Simply put, there are just not enough grind bands with names that start with I or J or justify individual mixtapes, so I’m forced to smoosh them together in order to present you something that’s actually worth your time. Here’s what I’ve gleaned. The I bands really enjoy iron while the J bands like to get down with Jesus. Personally, I think Iron Jesus would make an awesome band name. Don't steal (steel?) that. That shit's copyrighted.
Meanwhile, here’s your I, J mixtape [Mediafire].

Jig-Ai
Jigsore Puzzle
Insted
In My Eyes
IN DISGUST HOW DID YOU FORGET IN DISGUST!?

I Shot Cyrus
Instinct Of Survival
Impact Unit
I Object

No Impetigo? That's a surprise!

you guys have figured out by now that i don't really dig gore, right?

is that a salvador dali painting from hitchcock's spellbound?

get that man a cigar. i wondered when somebody would notice.

i'm sorry, sir. all i have on me right now are itsaboys.

congratulations on your new baby girl!

you have any idea how hard it is to find "it's a hermaphrodite" cigars?

indeed, better roll your own and use a magic marker.