I am not writing this book for people below the age of 18, but I see no harm in telling young people to prepare for failure rather than success, since failure is the main thing that is going to happen to them. 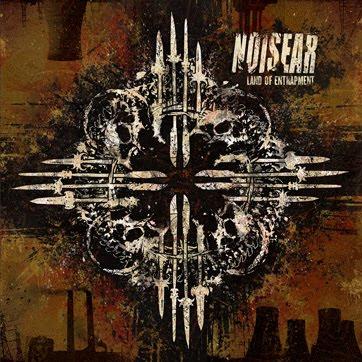 to break off my sentences at really random

points. That would disrupt any

flow the words would have, making

this really a bitch to read, wouldn’t

ment you’d get from reading this wouldn’

That’s the frustration I have with what should be an awesome split EP between two great young bands. The breaks between the songs are so long — five and six seconds in some cases — you lose any momentum from one track to the next. Noisear or The Arson Project will bang out a tune that plugs straight into your adrenal glands and then…stop. Long pause, and the bands have to establish that momentum again.
It’s a puzzle because these Relapse 7-inchers (this one is actually from late last year and I’m playing catch up) have been gems: Agoraphobic Nosebleed facing off with The Endless Blockade, Mumakil and Blockheads going head to head for a second time and, of course, Looking for an Answer’s awesome La Caceria. So I have no clue why the pacing on this one got all borked up.
Musically, both bands are working a fine hustle. While Noisear’s four tracks sound like demo versions of songs cut from Subvert the Dominant Paradigm, they display the same skronk ’n’ grind that’s made their name. This is the sound of platinum crickets armed with 21st Century recording technology. “Lamenting Breathalyzation” is Bryan Fajardo’s moment to shine as the bass and drums struggle to keep up with the punishing pace he sets. Guitarist Dorian Rainwater dominates “Li(f)e” with tight-wristed guitar rushes that may be better than some of the songs on their last full length. More than introducing a new sub-sub-sub genre on “Rhino Grind/Frienemy,” the song is one of the band’s better amalgams of all their competing impulses perhaps ever.
Flipside, Sweden’s The Arson Project’s four songs sound much more professional and are a logical continuation of Blood and Locusts. It continues their trajectory as an up and coming Scandi-grind phenomenon. Though the Niklas Larson’s vocals tend to be one dimensional, he gets a chance to stand on his own as the instruments drop away at the close of “Gutter King.” “Life Drained” swipes the glittering guitar tones from some shoegaze troupe, and just about the time you start pondering whether shoegazecore is (or ought) to be a thing, The Arson Project erupt into their wonted grisly grind ways.
Pauses and pacing issues aside, this another tidy little chunk of vinyl that adds Relapse’s imprimatur to two up and comers.
Posted by Andrew Childers at 7:12 PM

This is really fun. I think you started a new style of grind review there.

And it doesn't save my elaborate spaces. Oh well... another time.

I had the same problem with this; however, I have the (mis)fortune to still be using iTunes, which gives you the option to chance song start and stop times. If you bought the actual vinyl instead of the mp3s, however, I guess you're kind of screwed. It's a shame, because otherwise it's quite a good release. I like Arson Project's songs on here a lot more than their last stuff. It sounds like they took a page or two from Noisear's playbook this time around.

i am the number one fan of awkward breaks in sentences if not altogether forgetting about punctuation and requiring any reader to work harder at coming to that click of meaning but you're talking about music mostly and i'm just saying i'd have much more fun if you wrote all your posts all sketchy like that. i mean that's how i do.

i could never compete with zero punctuation reviews