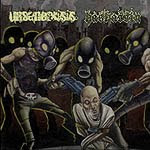 Unsane Crisis/Hashassin
Split
Throne Records
2003
With a new Looking for an Answer album making me do the Snoopy dance, I wanted to pay tribute to another transitional fossil in the Spanish band’s evolutionary development: Unsane Crisis. I’ve already gushed my warm manlove for Denak, where Looking for an Answer vocalist Inaki and drummer Moya got their start, but bassist Ramon traces his roots back to Unsane Crisis.
That band, whose discography consists only of this split with fellow Spaniards Hashassin and then another shared album with Ekkaia, actually leans more to the burly, grisly grind of another slice of Spanish awesome, Nashgul. Their opening 16 selections sound like a tribute to classic grind: all blower bass rumble and power drill riffing done in a tidy 30 seconds or less for the most part. Though they keep it short, Unsane Crisis manage to ensure each song has an identity and a movement of its own without giving way to faceless blasting. Ramon also makes his mark on the song “Anti-Emo” where he busts out a pitch perfect parody of self indulgent Red Hot Chili Peppers bass noodling. You can see why Looking for an Answer had to snag him a few years later.
Flipside, less info is available about Hashassin (so if anybody knows more, feel free to share) whose 13 songs are burdened under the weight of overly long, intrusive samples and a featureless wall of fuzz and screaming. While the band occasionally channels Total Fucking Destruction style vocal wipeouts, their songs are mostly a forgettable blur that don’t demand close listens. As far as I can tell, this is the sum total of the band’s existence.
Neither band was destined for the grindcore hall of fame, but for those curious about the emerging supremacy of Spanish grind, this is an interesting footnote in that development.
Posted by Andrew Childers at 7:44 AM

Mind blown. I was thinking the new Looking For An Answer had a big Nashgul feel, now I know why.

I actually have the Hashassin demo from 2002 on MP3. My friend gave it to me forever ago and I don't even think he knows how he got it. He kind of had this "look what I stumbled upon" attitude about it. They do a cover of Salt Mine by Assuck at the end of the thing and it isn't half bad. Overall it is pretty good, actually. Their demo doesn't come across as a wall of fuzz as you describe them as here. Here it is anyway. The link should be good for the next month http://www.sendspace.com/file/m0ppo9