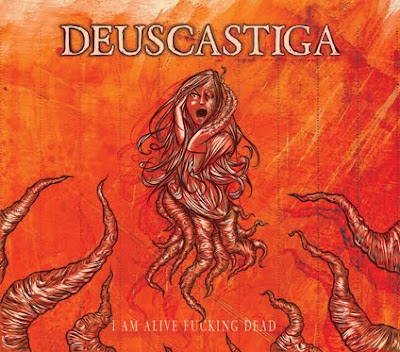 Deus Castiga
I’m Alive Fucking Dead
DC Records
If you’re not ashamed to admit having seen it, you may remember Kel Mitchell’s character in the execrable Mystery Men who was gifted with the power of invisibility – provided nobody is looking at him. That is, unfortunately, how I feel about Brazil’s Deus Castiga. There’s absolutely nothing wrong with their thrashulated grind, but each time I’ve sat down to write up their EP I’m Alive Fucking Dead, I’ve drawn a total blank. If they’re not in front of me, Deus Castiga’s 13 songs – other than “Scars,” which winds itself into a nice tight tizzy – just don’t leave that much of an impression.
Deus Castiga rock out like a thrashier Selfhate but there’s some missing X factor to their music that I’m craving but just not getting. The guitars shrill like power drills winding up and the band favors spidery, trebly movements. The upper register screeches border on blistered black metal. I think it’s the drumming that might be my biggest stumbling block. Technically, it’s a busy brew of snare drum fills and blast beats, but the clicking double bass drums grate the nerves.
Deus Castiga are a band with plenty of musical skill to burn and with I’m Alive Fucking Dead they leave it all on the ice, as they say in hockey circles. So I don’t want this to song more negative than it needs to be, but I’m just gonna be looking for the band to make more of a songwriting leap in the future. If you're going to castigate the deus, I want to feel the lashes.

[Full disclosure: The band sent me a download.]
Posted by Andrew Childers at 8:33 PM

well ya the drums are sloppy at times which having them so forward in the mix does not help. but i like the music. it's raw, honest and pissed. would be fun live.