You Grind...But Why?: Ryan Page

Ryan Page is one of the most exciting of the young guns slinging a guitar (or sometimes an electric toothbrush or bedframe) these days. Whether it's marrying Italian horror soundtracks with faulty electronics and grindcore in Body Hammer or revitalizing power violence for the 21st Century in Robocop, Page is consistently several steps ahead of his peers. He's been so successful (musically if not necessarily financially) because his compositions are carefully considered. Grind and power violence are no lark for him, and he approaches his music as would any other serious composer. Even if his methods are...unconventional. 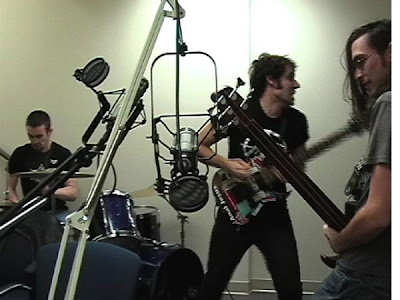 "I've been trying to think of an answer that's a bit more personal than 'I've always been into extremes and grindcore is the most extreme blah blah blah,' unfortunately I think that's ultimately pretty close to what I was thinking at the time. Drone and grind are the spaces where tempo, perceptually and conceptually, begins to fall apart. There's a quote from Stockhausen somewhere about the point at which rhythm ceases to be perceived as such. Essentially the idea is that if a rhythm is slow enough (the sun coming up everyday for example) it loses its rhythmic character and becomes something more systemic, similarly extremely fast rhythms essentially become tonal, or in the case of Body Hammer, a noise band. Anyway, at the time I was interested in the barriers for speed and the fastest possible music, and eventually I wanted to take things further, beyond what Agoraphobic Nosebleed was doing, which was my benchmark for grindcore at the time (and to a certain extent it still is). This was around age 15 or 16. I was playing in a hardcore/grind band, and becoming somewhat frustrated with the limitations of that.
"I guess the other element of the narrative is that I also developed an interest in noise; an interest that only grew when my bandmates protested ('that's stupid, you can't have a separate track just for feedback,' 'it needs to become a song eventually'). Interestingly, the sound I hoped to achieve with this band was a lot like how Robocop II ended up. So out of the frustrations of feeling limited by playing with other people, I started the recordings that became Jigoku.
"Many of the songs on that album came from improvisations, using microphone feedback or prepared guitar. I was interested in using limited means (guitars, microphones, and drum machines, no synthesizers) to create a fairly broad sound. I wanted to remove myself from music as much as possible. I would detune my guitars to the point where they were no longer producing pitch, and use a wrench I found like a bow (and arrow, although sometimes in the musical sense as well) or create rhythms by hitting my pickups. On one track I used a giant reverb on the a recording I made of scraping on a bedframe."
Posted by Andrew Childers at 6:30 PM

This young man is obviously a musical deviant of the highest order.

^^^ I can't come up with anything cooler to say about him than the above.

I will, therefore, second it.