Florida duo Rehumanize formed with a simple mission: kick ass for the Lord. Singer/drummer Felipe may have been a grind novice, but he scored a winner with his first crack at it, Resident Apostasy. Weaned on death and black metal, he said grindcore's direct, pugnacious nature freed him up to address his Christian faith in avenues other musical styles foreclosed. 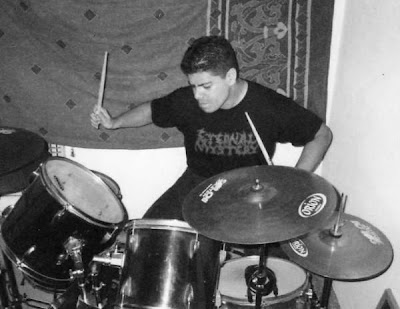 "I was introduced to grindcore in the late '90s," Felipe said. "Since I was a death / black metal fan, I loved its speed, aggressiveness, and brutality. I had already played in death and black metal bands, and thrash, so I started Rehumanize to vary and to be able to express myself differently. I am more of a death metal fan, but grind is awesome, the sonic chaos attracts me, so I wanted to play my own. My death metal lyrics did not allow me to express myself in the way I wanted to express myself with grindcore, and that was also a good release. I'm a retired musician but maybe in the future I can continue with grindcore."
Posted by Andrew Childers at 3:51 PM

Labels: grindcore, interviews, rehumanize, united states, you grind but why