"You. One live body, brains still somewhat intact. Molly, Case. My name's Molly. I'm collecting you for a man I work for. Just wants to talk, is all. Nobody wants to hurt you.""That's good."" 'Cept I do hurt people sometimes, Case. I guess it's just the way I'm wired." 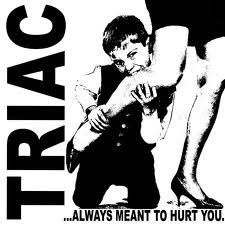 Triac...Always Meant to Hurt YouA389 Recordings
Delightfully atavistic, Triac dispense with any pretense of mild-mannered Bruce Bannerisms on ...Always Meant to Hurt You and careen face first into HULK SMASH! This four-song 7-inch (which comes a complimentary download for you digiterati) is refreshing in its unpretentious shot to your spinal column.
Originally released as a tour-only cassette in 2010, the good folks at A389 have brought Triac's latest to the masses on a sweet vinyl platter that definitely would have bumped somebody off the best of 2011 list had I gotten my copy in time.
For their follow up to the impressive Blue Room, Triac have gotten leaner and more nasty in disposition. Second sider "Halo" swings with that urban hardcore swagger previously incarnated by Unsane. Here it gets riddled with a grind sense of nasty nihilism and punk seethe. It's driven to ever more reckless tempos by Jake Cregger's frantic drumming only to slide into ringing guitar feedback and clotted amp noise. The guitars of opener "Child Thief " flail with abandon, running body-first into whatever obstacle foolishly stumbles into their transit. Then there's the just-short-of-a-whine vocal sneer taunting you, daring you to punch back, knowing you're probably too much of a pussy to try.
...Always Meant to Hurt You is a lithe animal, poorly caged ferocity slimmed down to a lean jungle predator. Where Blue Room was big and boisterous, this outing finds Triac far more focused and enraged. Shedding the extra pounds really suits them. Come feel the pain.


Posted by Andrew Childers at 7:00 PM

Nice use of the Hulk,not enough comic references these days.


Always mix this band up with Extortion. I couldn't tell you why.

Will pick this up if money permits.

The Triac/ASRA/Defeatist split LP has always been something that has tempted me.