G&P Review: Tools of the Trade 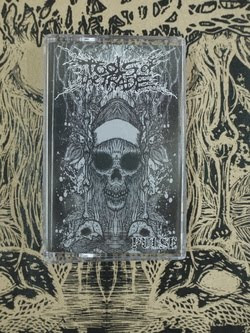 Tools of the TradePulseStoneville
Tools of the Trade? I bet you have a pretty good idea what this Malaysian death-grind band sounds like just based on that don't you? And yes, while Symphonies of Sickness looms large over Pulse, I bet you didn't expect that vaguely Arabian, rather Cryptopsy-ian clear guitar riff that broadsides opener "Embodiment of Confrontation" or the out of nowhere full on wah pedal psychedelic freakout that explodes closer "Science Failure." They immediately yank you out of the musical experience you've mentally prepared for yourself. It's jarring but in a delightful way, like taking an unexpected boat ride with Willy Wonka.
Those unexpected digressions aside, Tools of the Trade comfortably prowl that murky gray area between traditional death and grind, that twilit gloom of things more felt than half-seen typically haunted by Circle of Dead Children. On that front, Pulse is unrelenting, constantly moving like an ADHD child on a caffeine bender. The snare, in particular, just refuses to ease up. There's not much here you haven't heard a hundred times before, but Tools of the Trade give episode 101 a thorough trashing, proving they can stand with the pack even if they barely separate themselves.
However, there are some interesting production choices lurking here if you listen carefully. I was particularly intrigued at the way the guitar leads of "Implementation of Hates" were suffocated in the mix where other bands would have shoved them screaming to the forefront. Instead, Tools of the Trade just make them one more swirling bit of shrapnel in their tornadic chaos.
Tools of the Trade are clearly comfortable with their forceps and blades. While Pulse doesn't deviate far from the death-grind playbook, the cassette is just one more datum pointing to the rising dominance of Southeast Asia on the global grindcore front.

[Full disclosure: The label sent me a review copy.]

Totally want to get on this.

Totally wish it was available in some sort of digital format.

Eastern Grind Unleashed 4-Way Split CD with FallenWorld and Eyesore from Singapore and TOOLS OF THE TRADE and Negation from Malaysia IS STILL AVAILABLE. 28 tracks and over 40-minutes of back-to-the-root-GRIND : the Eastern Style! TOOLS OF THE TRADE first ever official release!!!! Or TOOLS OF THE TRADE "Inmate Consumption" full-length CD. All releases all different line-ups. Contact; straineyes_AT_gmail_DOT_com

the blog is officially operated as our Malaysia DIY Hardcore Punk documentation
please check it out!