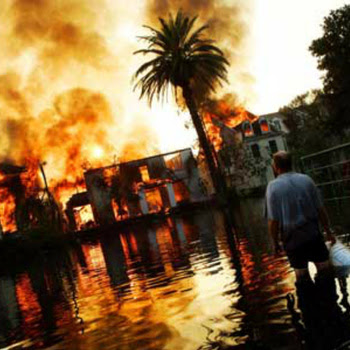 Wet Nightmare
Wet Nightmare
Bandcamp
A clever song title goes a long way toward grabbing eyeballs in a media saturated environment where listeners have endless options and their spastic, ADHDed attention is the most precious commodity musicians can envision. Total Fucking Destruction set the bar pretty high with "Seth Putnam is Wrong About a Lot of Things But Seth Putnam is Right About You" and Wormrot made me giggle like a school girl with "You Suffer...By Why is it My Problem?" Just thinking about either of those song titles is enough to send me to my album collection to binge like a comedy grind crackhead. Wet Nightmare come pretty close to those heights with "Insect Welfare," which once made me blow Fruity Pebbles all over my laptop screen. So the duo have that going for them, even if their humor is still a tad hit or miss ("Raped in the Superdome" is less clever than it is tasteless in an Anal Cunty kind of way).
And speaking of Boston's most overdosed blurcore hooligans, Wet Nightmare straddle their earliest, loosest blastiest material with something more structured a la early Napalm Death, if you need a musical reference point. So while all of that will definitely pique my interest, Wet Nightmare's challenge is holding my attention. And this, unfortunately, is where they're going to struggle a bit. Musically, their presentation is just spiffy, but like a lot of bands out there making their own way, Wet Nightmare's miniscule recording budget saps their songs of that sonic jolt to the adrenals that makes grindcore click. The guitars are wiry and probing but never pierce too far below the dermis and the drums sound like they've been smothered in feather pillows in spots. That's not to say there's anything particularly wrong with Wet Nightmare's music unless you're turned off by tasteless rape jokes (see also: "Donald Flagg Was an Honorable Man"). Wet Nightmare's task is to translate their racket into something that has the zing to stand out in a crowded field.