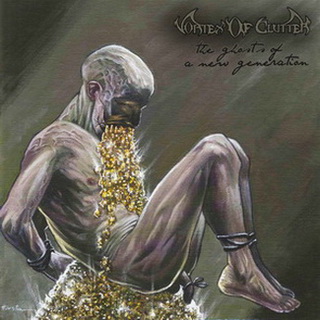 Vortex of Clutter
The Ghosts of New Generation
Self Released
Vortex of Clutter is a pretty apt name because there doesn't seem to be a death metal innovation in the past 15 years that these Turks haven't appropriated and tried to shoe-horn in to The Ghosts of New Generation. It's not enough to make their four song EP unlistenable, but the tunes careen from death to hints of tech to chunky grooves without ever settling into something you feel you can really wrap your ears around. And that's all before they start working in the Iron Maiden vocals.
Case in point, typical effort "Patriarchy" meanders across the death metal map without taking up residence in any one locale long enough to make more than a cursory survey of the terrain. At its core, it's a hefty death metal tune that nods in the direction of melody without going full Gothenburg. The fact that it's the most deathly of their metal tunes overall makes it the most palatable.
Vortex of Clutter's one stab at a signature move is the Bruce Dickenson vocal wailing. They start sneaking it in on the song "Abdul," craftily mixing the highs deep in the song to double the death metal grunting. However, by the time "Cocktail" screeches on to the scene, the classic air raid siren takes center stage.
It's not the Vortex of Clutter are untalented -- quite the opposite, in fact. On a technical level, they achieve every mode they try. What they still need to master is combining all of those disparate impulses into coherent songs that develop their own identity. If they can harness the vortex and clear out the clutter, this would be a much stronger effort.

[Full disclosure: The band sent me a download for review.]
Posted by Andrew Childers at 7:59 PM

I'll give these dudes a shot sometime, as I can enjoy a good clusterfuck sometimes (huge fan of Cryptopsy, Lykathea Aflame, Red Chord, Gigan, etc.).

Also, the little bow tied around the penis. Win.

they just wanted to class it up and make it special for you.