G&P Review: Standing on a Floor of Bodies 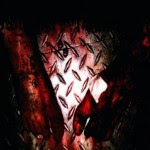 Standing on a Floor of Bodies
Sacrilegious & Culturally Deficient
7 Degrees
Horror film sequels are often terrible and completely unnecessary. There's always the contrivance of trying to explain why the slasher villain/exorcized demon/dissipated ghost/evil corporation actually survived the first film despite being soundly defeated by all appearances. The ham-fisted, cash grab nature of sequels usually means squeezing out everything that made the original serendipitously awesome in name of the most conservative, trite storytelling possible. Mike Stitches of Standing on the Floor of Bodies beat those odds by churning out another grindcore nightmare that's just as awesome, debatably better, than 2010 horrorshow demo Teaching Pigs to Sing. And he did that despite falling into the sequel trap of coming back with a bigger cast, enlisting new vocalist/lyricist Bvnny to back up the beating.
Standing on a Floor of Bodies is built on a foundation of bludgeoning Man is the Bastard bass, choppy programmed drums, keening electronic noise and just a dash of Body Hammer creep-factor, careening between blastbeats and power violence loom the entire time. New body Bvnny helps double up the vocal torment, twinning with Stitches to unleash a grunt 'n' groan counterpoint of pit of hell roars and shrieking, pestilential wailing. The results are 15 minutes of decidedly unwholesome and completely unsettling music that forms a single coherent whole, wrapped up in delightfully sanguinary artwork that looks like it was left over from an old Unsane album. Aside from an off-kilter intermission of half-heard ghost whispers and glimpses of fleeting noise that only ratchets up the  unease, every song on Sacrilegious & Culturally Deficient slams into the next, forcing you into the next uncomfortable moment like that demented carnival ride the Joker set up for Commissioner Gordon in The Killing Joke.
The album ends with almost a minute of placid silence and it's not just an arbitrary addition to stretch the album's runtime. It's a needed respite to regain your psychic bearings after narrowly escaping Standing on a Floor of Bodies' demented blastbeat funhouse. But don't think you've escaped. With an effort this good, you know they're bound to make a sequel.