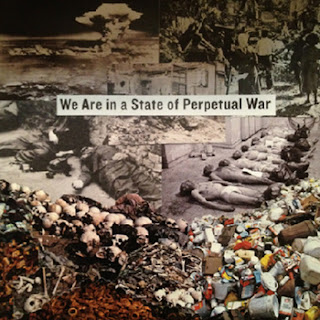 Detroit
Detroit
Grindcore Karaoke
As if one top 10-worthy album this year in Pusher and a kick ass split with Robocop  weren't enough to crown 2012 already, Canadian power violence overachievers Detroit are rocking your earholes yet again with a tidy self-titled record that may just be their best one yet. Through some power of musical osmosis, Detroit seem to have absorbed the musical violence splitmates Robocop shed on Dead Language, Foreign Bodies, turning in their tightest, most abrasive performance yet.
Their self-titled album, with a new singer in tow, is not a huge departure for the Canadian neo-violence collective. Rather it ups the ante on everything they’ve done before, ruthlessly churning through six new originals and an Infest cover in less than four minutes.
Everything about this effort is raw and burly and noisy and perfectly violent. The new singer is not much of a change, but he brings a tad more muscular delivery to the mic that nicely dovetails the band's more aggressive stance. Album centerpiece "Without" is one of those slow build bits of pyrotechnic brilliance that radiates out in chest-crushing shockwaves. "The Only Itch That Never Needs Scratching" rodeos the kind of slab-sided pounding you expect from Iron Lung in a concise 25 seconds. Waving goodbye with a rousing rip through Infest's "Feeling Mean" just punctuates the tone Detroit set from the album's first note.
Way back at their earliest demo I (half jokingly) dubbed the Detroit guys Robocop Jr. Since then they’ve shared wax with that band and now they’re moving into the same spiky sonic territory as the (now bicoastal) Maine bastards.
Posted by Andrew Childers at 7:05 PM

I'm surprised you could like anything related to Detroit.

What khl team are you going to root for?

first of all, sir, i've already made that joke. *ahem*
http://grindandpunishment.blogspot.com/2012/02/g-review-detroit.html

secondly, i think i'll become a petersburg ska fan. may be the only way i ever see vladimir tarasenko actually play.

Sorry Andrew, I forget to check my g&p shrine here and there.

I'm all about the Traktor's, with a name and logo like that you cant go wrong.

I see your club has kovulchuck... Well I wish you luck in the soviet "everyone's a winner after Stalin cup."

right now down goes brown is pretty much the only thing keeping me from running up to new york to nostril rape bettman and fehr.