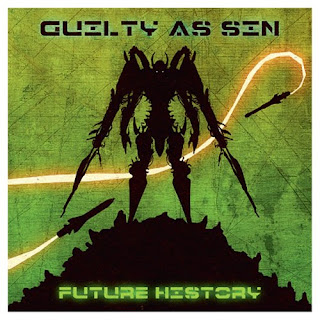 Guilty as Sin
Future History
Self Released
Guilty of Sin prove the old adage (old in that I just made it up and I'm old) that drinking deep of Voivodian weirdness is never a bad career move. Eleventy albums in, this space cadet Massachusetts trio is still metal thrashing mad and better than ever; they've finally got a handle on the extraneous world music elements that felt so disjointed in some past efforts. Now the freaky horn jazz that rears like the faux-Gundam on the album corner feels integrated into the music rather than "hey, we took a world music class last semester and are totally broadminded now."
But like a lot of Guilty as Sin albums, Future History suffers from a bit of a split personality. When they're on an instrumental run, Guilty as Sin are invigorating and compelling. The way the skipping, playful Pink Floyd riff that opens "Midnight Hammer" slams into its later Mastodon crush catches me every time, even when I know it's coming. But Future History's crowning jewel is "Magical Papyri of the Tetragrammaton," which rides a twisty, arabesque Nile-ish lead guitar like it's a magic carpet. Even the super-80s keyboard cheese at the end just works for reasons I'm not sure I understand several listens later.
So that's the good, and when Guilty as Sin are on their game, there's a lot to love. But my standard complaint with the band still stands: the vocals blow. Musically, Guilty as Sin shoot for the stars (sometimes literally given their scifi proclivities), but the charisma-less hardcore grunt drags the whole affair down into something far more quotidian. If Guilty as Sin insist on having a frontman, they need to find somebody who has something to say and knows how to convey it because endlessly grunting out "oblivion" on opener "One-Way Ticket to Oblivion" is a tough hurdle for newcomers to get over.

[Full disclosure: Guilty as Sin sent me a review copy.]
Posted by Andrew Childers at 9:14 PM