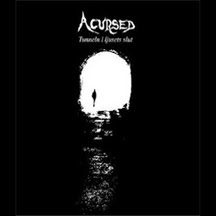 Acursed
Tunneln I Ljusets Slut
Prank
For a while I was worried Thomas Lindberg would have to singlehandedly do all the heavy lifting in the Swedish hardcore scene. Not that I doubt Tompa’s ability following a solid new outing with The Great Deceiver and an absolutely rampaging new Disfear disc, but it’s good to see the man get some help. Even that guy’s gotta take a break some time.
So enter the spelling challenged Swedish enclave Acursed and their most recent offering for Prank, Tunneln I Ljusets Slut, a tasty slab of pink in the center d-beat from the land where Discharge still reign as gods nearly 30 years after they dun datted the first dun dun dat.
According to Inter Tran, the title is actually The Light at the End of the Tunnel and, sadly, has nothing to do with sluts. We were hoping maybe some of these oh so serious punk types had finally lightened up a little a decided to maybe crack a smile every so often. But that’s the only cue you’re going to get on this album’s content because this beautifully designed monochromatic digipack fails to include lyrics or even song titles.
You may notice the album’s design bears a striking resemblance to the most recent offspring of statewide d-beat collective, Tragedy, and that bad is a perfect reference point for the moody melodies that waft like smoke rings around this half an hour of crusty metal. Before you cry rip off, this is actually the stateside reissue of this band’s 2004 album.
Acursed break up their d-beat rampage with frequent spoken word pieces. But without a close friend fluent in Swedish to translate, the monologues begin to sound didactic despite the lilting Scandinavian accent.
You can just bet these guys are laying a serious bummer on you about war, death, misery and the way corporations and government conspire to strip you of your liberties while you consume yourself into oblivion. Skip the campus rabble rousing and enjoy the 20 or so minutes of hardcore heaven that light up the end of this dark d-beat tunnel. And hopefully Prank, which also brought Totalitar, Avskum and Svart Sno across the pond, won’t make us wait another four years for a follow up.
Posted by Andrew Childers at 9:19 PM

excuse me dood, but you obviously have superficial knowledge of the swedish d-beat hc scene. There are so many d-beat bands raging in this country, so many that carry the legacy of true diehard punk that you could never count them all or know every single one. With Tomas from Disfear, you obviously like the poppy d-beat material, that is for fair-water fans. The deep end of the water where all the shark warriors hold their ground is shielded off to you because it is for only those who truly understand this music. Those who know can relate. Even the generic disclones add something new and subtle to the canon that snobs and elitists cannot acquire. True, there are some bad d-beat bands, but this is not to say they cannot get better and maybe with some money for a good recording despite being such broke-ass panhandling punks. OUr music/noise is not a novelty or about novelties, it is about being a steady charging warrior. Those who know can relate.

here are so many d-beat bands raging in this country, so many that carry the legacy of true diehard punk that you could never count them all or know every single one

"Tunneln i ljusets slut" actually translates to: The tunnel at the end of the light. Don't trust inter tran, it makes a depressing track sound less depressing than it actually is.