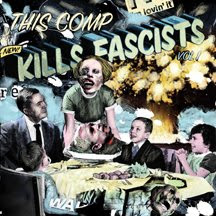 Various Artists
The Comp Kills Fascists
Relapse
An acid laced grind trip through the oh-so-long-ago 1990s, Scott Hull’s pet project, This Comp Kills Fascists, hearkens back to Pessimiser’s classic Cry Now, Cry Later series, which set the standard for power violence, fastcore, what have you a decade gone.
Though Hull hand culled this collection of methed up metal maestros, he demurely keeps his own bands out of the limelight, letting a few lesser lights grab the stage for an hour of panting acceleration with the occasional bowel-scraping sludge break breather.
In that hour, This Comp rams together 14 bands with speed as their common denominator, collecting nostalgic faves (reunited Agents of Satan and Brutal Truth back with their first new tunes in more than a decade), current standard bearers (Kill the Client and Insect Warfare), rising new jacks (ASRA—oops misspelled on the back artwork) and a horde names-you-know-but-maybe-haven’t-heard (Maruta, Shitstorm, Magrudergrind).
Relapse money may be backing the project, but the label smartly kept the wallet closed when the bands hit the studio, giving the whole project that rough production that is so vital to an hourlong comp of bands playing largely identical styles.
While this many bands playing similar styles tend to blur if your attention wanders while spinning this disc, the real stylistic standout is Total Fucking Destruction. But really, name me a situation where Rich Hoak’s three ring grind circus would fade into the background.
Hoak, the only person to score two spots on the disc, also anchors the recently reunited Brutal Truth who hammer out some of their best sounding tracks of their already impressive career. Lethargy/Sulaco guitarist Erik Burke slides into Gurn’s guitar spot, and while the songs may have cashed out some of their wandering jazzy meandering, Burke’s trademark calliope-core keeps the four new tracks whizzing while taking every interesting digression along the way. “Turmoil” has been ass raping ear holes (process that image for a second) on the band’s MySpace page for a bit and the three other songs are just as solid, with none of the thin production that sapped (until now) parting shot Sounds of the Animal Kingdom.
The only quibble I have with the whole outing is with the words “Power Violence” printed down the CD’s spine cuz most of these bands, while they no doubt have some Man is the Bastard and Capitalist Casualties albums in their collections, fall squarely into the grind category. However, to avoid skirting the FCC’s truth in advertising statutes, estrogen-laced Spoonful of Vicodin and the awesomely named Chainsaw to the Face (c’mon, what the fuck do you think a band named Chainsaw to the Face should sound like? Damn skippy) faithfully bring the Neanderthal sludge, breaking up the blast beat monotony.
ASRA, Kill the Client and Insect Warfare, who collectively own the entire Earache catalogue from about 1986 through 1992, sound like the sum of their influences, but a little tradition ain’t such as bad thing when it sounds this goddamn solid, power sander to the ‘nads solid.
Part nostalgia trip, part grindcore tradeshow extravaganza, This Comp doesn’t try settle for recapturing bygone glories but rather reduces, reuses and recycles a concept that’s lost its cache in an era when any band with a MySpace page can get their music to their eager fans. From the cut and paste Dead Kennedys gone George Romero artwork (check out the swastika-cock spewing Dubya and blood drooling Ronald McD on the inside) through the deliberately rough production, This Comp may not strike fascists dead, but it will definitely leave them with heart palpitations.
[Ed’s note: just a quick correction, I had previously mentioned that Crom would be appearing on the comp. Somehow I got my wires crossed cuz they’re not here. But I just wanted to cop to that mistake publicly. Oops.]
Posted by Andrew Childers at 7:59 PM

I remember my times in the college in the 90's, so I used to listen some of this music , I love these songs and I have some of the albums of these bands.Great information thanks for share.

This is perfect because they have songs that awake my senses actually I like so much the violence at the same way of you, I'd like you giving me more names of excellent bands like this one.