Blast(beat) From the Past: Asterisk* (How Swede It Is Part 4) 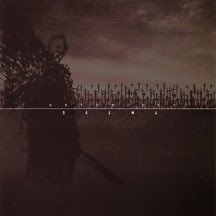 Asterisk*
Dogma
Three One G
We hold these truths to be self evident: all men are created equal but Discordance Axis has none.
And while The Inalienable Dreamless is an unfuckwithable milestone for grind (see top right) and should be a cultural touchstone anthropologists will reference in a more enlightened age, surprisingly, Discordance Axis are not one of those bands that led to wholesale cloning (though that may finally be changing).
That has probably contributed to the band’s singular stature, and Umea’s Asterisk* were certainly one of the first to nick Chang-san’s signature sound. These three Swedes were one of the few bands to take Discordance Axis’ shtickfor a spin through a graduate philosophy course, giving it a thoroughly postmodern sheen.
Rather than manga and sci fi novels, Asterisk* roared their sleek, slithering grind straight through the world’s weightiest questions, addressing animal rights, Shakespeare, religion and philosophy with a thoughtfulness that belied the band’s brevity.
Dogma, the band’s discography, brings the kind of tunes that would have seared themselves into Johnny Mneumonic’s permanent recollection. Scope the way “An Angel Collapsing’s” insectile skitter hearkens back to Rob Marton’s “Ruin Trajectory” string scrapes. Asterisk* also show they have no fear of blithely traversing grind’s well posted boundaries to dabble in Euro techno dance music on the brief but accurately titled “The Anomly.”
While their DA debt is also self evident, Asterisk* were the plucky clone that could, taking Jersey’s finest export’s signature sound and bending it to their own profound purposes; not so much wholesale copyright infringement as sincere homage.
Posted by Andrew Childers at 7:22 PM

Labels: asterisk, blastbeat from the past, discographies, dogma, grindcore, how swede it is, three one g

Speaking of AoA; while they certainly are heavily influenced by DA, there's a great amount of other stuff there (SWANS, they say). In any case, I'm posting an interview tomorrow or so.

When I first purchased this album it took some time for me to warm to it as at first it all sounded a little too unstructured and hasty. Subsequent listens revealed many subtle details to their music. They definitely have earned a permanent spot in the pantheon of great Swedish grind bands.

And speaking of Swedish bands, how about that new Crowpath? They've been one of my favorite Willowtip bands ever since their debut Red on Chrome a few years back. They chuck quite a bit of Gorguts/Immolation-at-3x-speed death metal in there with the grind but I've always felt they've carved out their own niche and what they do, they do very well.

I agree about Crowpath. Those dude kill more babies than most other Swedish bands.

I too agree about Crowpath.

i'm gonna red facedly admit crowpath is one band i just haven't devoted enough time to despite my willowtip addiction (confound it i'm just one man). but the people have spoken so i clearly need to rectify that gross oversight. and by all means, pipe up with anything else i may be missing.

my favorite WT band has long been Watchmaker. I had the privilege of seeing them multiple times, and even helping to book them once, when they were active. A little unorthodox compared to most bands on WT perhaps but to my ears always the most brilliant.

i got into WT stuff back in college when we'd make the trip to club laga. so i got a soft spot in my heart for pitt bands like codc, creation is crucifixion, fate of icarus and sadis euphoria.

Hey, my name is Jonas and I was the singer for a*. Thanks for all the kind words. I think they were spot on! =) We were in many ways influenced by DA but that was mainly me, the others in the band had never heard them (except at my place). We each wrote about 1/3 of the songs though so the DA influence is obvious for sure. Other potent influences were Slayer, early Metallica and At the Gates (along with Ruins, Arnold Dreyblatt and others).

I love these mp3 blogs so please keep our music going on the webs. However, our albums are selling crap so if you want to donate to the cause of good music, go over to 31g and purchase the cd. It's not really expensive.

Thanks anyways ans keep it up.

jonas, i'm honored you stopped by. you heard what the guy said. go drop some cash on this shit, recession be damned. it's a better investment than ford right about now.