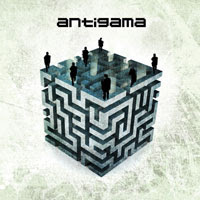 Antigama
Warning
Relapse
I have never been much of an Antigama fan. I don’t get what most people heard in Resonance. I thought it was an enervated and rather dull collection of songs by musicians who were just trying too hard to be bizarre and lost sight of the art of songwriting and niceties like passion.
But even with that antipathy, I have to admit Warning hooked me from the whipsnap opening of “Disconnected.” I’m starting to get it.
Warning, the band’s second Relapse effort, is far more hungry than anything I’ve heard from the Poles previously as they finally find the delicate balance between the bizarre and the blast. Antigama elevated their game by scuffing up their sound. Where I thought Resonance sounded sterile, Warning’s guitars feel contused and abraded while the snare drum sound captures that perfectly tinny practice room sound.
That rougher feel gives more … err … resonance to the band’s freakier moments like the spiral staircase guitar work of “Jealously” or arresting percussion of “Heartbeat.” Antigama also explore new sonic vistas amid all the grinding. “Lost Skull’s” bent notes and malarial swamp pacing could have be lifted from just about any NOLA great. Patryk Zwolinkski’s raspy vocal take even oozes a young Phil Ansemlo and bassist Szymon Czech’s guitar solo should serve notice to Sebastian Rokicki he faces a serious challenge for six string dominance in the band.
Antigama are testing the limits of my hard won respect ,though. In the middle of the interminable plunking piano and meandering drums of “Paganini Meets Barbapapex” my wife wandered through the room and asked my why I was listening to Spinal Tap’s “Jazz Odyssey.” (Still no word on who gets the big dressing room – the Poles or the puppets.) Ditto on the organ abuse of Sequenzia Dellamorte, which never seems to find a place amid the rest of the album’s twisted bangers.
Other than that, count me converted.
Posted by Andrew Childers at 8:44 PM

Definitely a step up from Resonance.

it's times like these that i wish i had at least ripped my copy of Resonance. haha yes:i am morbid.