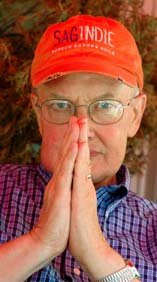 I’m not one of those trite make-lemonade-out-of-lemons kind of guys, but losing all my blog notes has not been the unmitigated disaster it could have been. To be honest, I felt like I was getting in a rut and was feeling lethargic and uninspired. Despite what my typo-riddled gonzoid editing may suggest, I actually try to plan and write my blog about a month ahead. So that means I often work in furious bursts with lengthy downtimes where I don’t really spend much time writing, and it’s in those lulls that I often feel the worst malaise.
My computer’s death came during one of those lulls where I was casting about for inspiration, and I found it in a counterintuitive source but one of my primary influences: Roger Ebert (and not just because we both married incredible black women).
Along with grindcore and 19th Century Russian literature, film completes the triumvirate of my passions. There’s a reason I reference so many films when I write about music. Trying to communicate the emotions aroused by something as abstract as music, it helps to be able to liken it to a known emotional quantity and film serves as a ready lingua franca.
If all you know of Ebert is the lame thumbs up/thumbs down/thumbs up your ass show from the 1980s, then you have been missing one of America’s most thoughtful and enthusiastic connoisseurs of film. Someone who is able to dissect Orson Welles’ technical mastery with a coterie of film students one day and voraciously consume the vapid, throwaway humor of something like Next Day Air with equal energy and set down in simple, evocative language just what it is about celluloid – or now digital video – that has captivated him for more than four decades.
Enthusiasm – that’s the takeaway here. I’ve been flipping through a couple of Ebert’s books lately where he dissects some of the greatest films – from Raiders of the Lost Ark to Roshomon – to explain why they are cultural markers and unpack the techniques that may only register subliminally while you watch.
Sure I subscribe to Decibel and troll the interwebs voraciously consuming other people’s thoughts on the music we all love and I pick apart the most talented writers to try to reverse engineer their thinking, learning from their offerings.
But my polestar remains Roger Ebert, a man whose proletarian prose (in the very best and most accessible sense) and infectious energy and cosmopolitan film consumption are unequalled by any other critic, professional or heartfelt amateur, in any other medium. Though it escaped me temporarily, it’s Ebert’s profound joy for his chosen medium that I hope to recapture as I dive back into the simple pleasures of metal played as fast as humanly possible.
That’s my goal: simple joy. Roger Ebert overflows with it, and it’s enough for me to forgive the fact that he hated Blue Velvet.
Posted by Andrew Childers at 10:37 AM

It'll always stay punk for me! No, I don't care. I am putting my hands over my ears now.

Random bullshit aside, I do enjoy learning bits of information about your influences and whatnot.

punk.... metal.... can't we all just agree to put on the dirty rotten lp and thrash the place?