Blast(beat) from the Past: Catheter 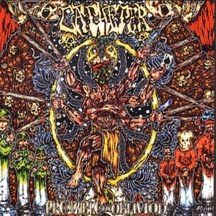 Catheter
Preamble to Oblivion
Selfmadegod
2001
The younger siblings to contemporaries like Assuck, Phobia and Excruciating Terror, Catheter were part of America’s second wave of grindcore, playing a crustier, more brutal style that seemed to be a deliberate reaction to the increasingly overproduced and metallic progression of Napalm Death and Carcass.
Though still intermittently active (including an appearance at the recent Maryland Deathfest – for more complete coverage see here and here), Catheter like World Downfall, Phobia and Agathocles before them tend to specialize in EPs and splits, having turned in only two solo longplayers in the last 19 years. Full length debut Preamble to Oblivion was a punk as fuck assault straight from the mean streets of Denver that wore its cred dangling from its wallet chain.
Powered by a Pete Pontikoff-style hardcore bark and rusted Folgers can snare drums songs like the gang chorused “Free Will” are a revolutionary call to arms that should be mandatory listening around the July 4th grill.
Catheter are masters of the elusive ability to imbue dozens of grind songs (SelfMadeGod’s reissue includes 10 bonus tracks) with a distinctive vibe that separates them from the blastbeat pack whether it’s the desert wind dervish of “Halo of Flies,” the brooding drums of “803” and the crackled static bass wall of “Doom Planet.” While Preamble’s blasts get thoroughly beaten, Catheter also swing with the crusty end of the doom continuum reigned over by Grief (“Chad” even swipe’s that band’s loping gait from “Earthworm”). “Korn Biscuit” even crashes to a close with a jazz swing pimp strut.
Repping the 303 since 1997, Catheter’s debut full length is a vital restatement of the punk ethos that drives grind and makes it unique from its metallic cousins. Preamble to Oblivion is just that because everything that came after was laid to waste.
Posted by Andrew Childers at 6:04 PM

Labels: blastbeat from the past, catheter, grindcore, preamble to oblivion, selfmadegod, united states

I missed this band during the fest and thought I'd see them at Memorial Day Massacre, no luck. I have yet to scope this band, will check out now because of this review!

Also, thanks for reminding me to do my Day 2 and Day 3 writeup of MDF.

unchallenged hate and 803 were some of my favorite songs. I love how it builds up. reminded me of an early napalm death riffs. this album has a lot of great riffs.

Looking forward to the MDF day 2 write up. that was an awesome day.

Normally I wouldn’t comment on posts but I felt that I had to as your writing style is really good. You have broken down a difficult area so that it easy to understand.
http://www.youtube.com/watch?v=EyuUyN5RVTI