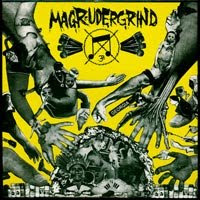 Magrudergrind
Magrudergrind
Willowtip
It’s hard to picture Norwegian black metal evolving as it did were it not for its fog-wrapped forests and ice-floe choked fjords as a backdrop. And we never would have been blissfully pummeled by the nihilistic machinery of Godflesh if the industrial clang and smog-choked atmosphere of Birmingham hadn’t weighed upon Justin Broadrick so oppressively.
My point being, grindcore tends to lack a sense of place. It’s either involved with issues too macro (war, destruction, government malfeasance) or too micro (just how many severed cocks can you cram in a suppurating pussy?) to take notice of its surroundings and draw inspiration from its own neighborhood.
None of that would have occurred to me were it not for Magrudergrind whose eponymous second album and Willowtip debut so perfectly encapsulates D.C. – a schizophrenic city that’s both overwhelmingly poor and black and at the same time home to the nation’s white (in every sense of the word) halls of power. But the trio of Avi Kulawy (vox), R.J. Ober (guitars) and Chris Moore (drums) thoroughly capture the city’s vibe on a sample-laced album that touches on themes of gentrification (“Fools of Contradiction”) and the divide between D.C.’s Fedland core and its impoverished southeastern swath (“The Price of Living by Delinquent Ideals”). Even the elegiac and stirring “Martyrs of the Shoah,” the last true song on the album, comes off as downright prophetic after a geriatric bigot from the burbs decided to shoot up the Holocaust Museum to impress the RaHoWa retards back home.
Sonically, everything is polished to a sheen courtesy of producer Kurt Ballou and mastering by Scott Hull (who selected the band for his This Comp Kills Fascists throwback) as Magrudergrind blast through half an hour of ferocious punk at the nexus of grind and power violence. The Magruders do throw the occasional curve ball with the slow kindling “Bridge Burner” or the hometown shout out, white boy funk of “Heavier Bombing” that’s one Chuck Brown cameo short of perfection.
This is the sound of band coming into their own, kicking back with a half smoke at Ben’s Chili Bowl and deciding to pen a love note to the city.

[Full disclosure: Willowtip graciously provided me with a review copy.]
Posted by Andrew Childers at 7:42 PM

Fantastic review, definitely one of the best grind/pv albums of this year.

I actually liked them more when they just thrashed. I mean, what are they trying to be now, Insect Warfare? Kill the Client? I love the stuff still, but ya know. I also think that the new ANb is overrated.

i'm actually not all that familiar with their older stuff beyond this comp...
but this really made an impression on me. i may be projecting, but it thoroughly capture's d.c.'s vibe.

62 Trax of Thrash, though a collection, contained arguably their best tunes. Rehashed had its moments but S/T seems more like what happens when labels influence the songwriting process. Still think it is great - just no where near "who they were."

i think this is a pretty good album. 62 trax is probably my favorite b/c of the riffs in it, but this album has some good slower parts that make you want to move. My main complaint though, is the samples they chose to use. tooo long!

Quality album but can't say it's their best, let alone this year's best - Wormrot and ANb should have something to say about that.

Check out the Magrudergrind split with Shitstorm. Great production, nice shredding selection - and Shitstorm slays, making it a worthwhile purchase.

In a 3 piece band when a member leaves you're going to get a different sound. This is the first album, TCKF aside, to contain the new guitarist. That being said, I think this is their best material yet.

I have a black T-shirt whit this image,I think that it is the best one that I have,so I think that this band is one of the best ones,I would like to meet their in a concert.