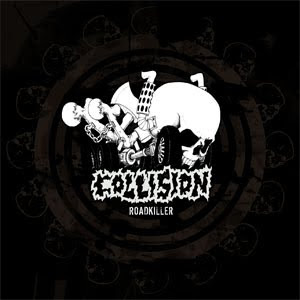 Unable to discriminate clearly between words and things, the savage commonly fancies that the link between a name and the person or thing denominated by it is not a mere arbitrary and ideal association, but a real and substantial bond which unites the two in such a way that magic may be wrought on a man just as easily through his name as through his hair, his nails, or any other material part of himself and takes care of it accordingly.

Names have power, according to our primitive ancestors. If true, I’ve always thought the single most powerful name in all of hardcore or grind had to go to Boston’s Siege. It’s just an explosive monosyllabic burst that perfectly summarizes the mindset and power of the band. Just saying it invokes an impressive feat of linguistic legerdemain, with the seething sibilant of the S and the full stop affricative G. You’re practically forced to grit your teeth in rage as you say it.
With Siege as the Platonic ideal, I’d have to say Holland’s Collision come pretty damn close to achieving that same transcendence through nomenclature. Collision pretty must sums up not only the band’s body bomb assault on second album Roadkiller but also their musical pedigree, which rests securely at the nexus where grind sideswiped the circle pit punk that birthed it. Look no further than the band’s bull in a Faberge shop cover of Bad Brains’ “Attitude.”
Despite being Dutch, Collision have a singular focus on the excesses of American popular and political culture as they mercilessly mock our questionable subcultures (“Oh My Goth), our colorful peasant class (“Redneck Rampage”), our self help obsession (“Kill Phil”) and even our propensity for expecting bloated, aging action film stars to cleave our political morasses with the same ease with which they dispatched any number of low rent Columbian mercenaries (“Body Building Blowout”). Pop culture gets punk’d by a series of fluid punk beat to blast transitions, foam flecked gang vocals (“Drama Queen”), ominous building chug interludes and punk rock solos (“On the Loose to Reproduce”).
The only crack in Collision’s grind edifice would be the questionable dual vocalists. Bjorn and Wouter both bring an impressive pitbull bark, but their styles are so similar as to be redundant. But that’s a quibble against a backdrop of enjoyable punk madness.
Posted by Andrew Childers at 7:50 PM

your intro to this post reminds me of the wizard of earthsea which i recently started re-reading... names... magic... im a dork lol

so am i cuz i actually love to read the golden bough. despite the casual racism of imperialism, fricken awesome book.

fuck ya might have to check that out another book in the same vein was the hero with a thousand faces. didn't make it all the way thru but what i did read was pretty sweet. all that comparative religion / zeitgeist stuff is pretty interesting

thanks for the recommendation. it's added to my extensive to-read list.