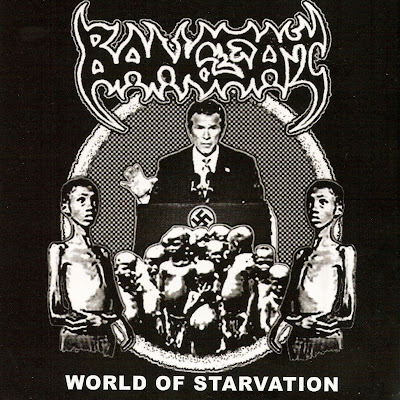 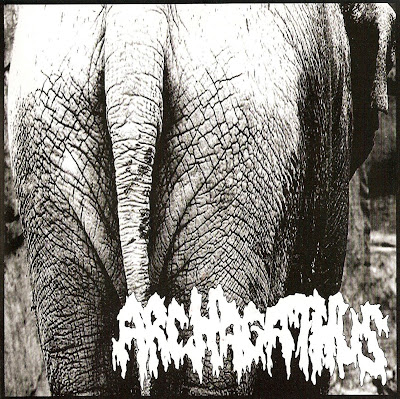 Bangsat/Archagathus
World of Starvation/Split
Bullshit Propaganda
Being a lazy, self-absorbed American, I’ve come to accept it as a given just how large a chunk of my life is either being outsourced to or imported from the Orient all so I can save an extra 30 cents on beef jerky at 7-Eleven. Living with that reality, somebody please tell me why I’m continually surprised at just how good the grind being pumped out by Southeast Asia has been the last couple of years. Still reeling from Wormrot’s heretofore unacknowledged Manhattan Project, Indonesia also apparently has its own weapons grade grind initiative going on behind the scenes, as evidenced by Bangsat.
More Torture Incident than Wormrot, Bangsat is a testicle crushing if flawed slab of meaty, guttural grindcore that functions best when the band throttles down the speed. The band’s real standout is actually the slower paced “World of Starvation” a visceral, looming monster stomping over the landscape before a brief sprinting finish. Ditto “Gears of Death,” which also features enough punk tempo passages that drummer Yope can concentrate on his patterns and fills. Because when the band goes all out grind, as on “Kingdom of Hypocrisy,” Yope’s drumming fades into a dull featureless blur that pulls the attention away from Toan’s enjoyable, chunky riffs and Agus’ wails. Slow down please.
On the flip side, everyone’s favorite Agathocles tribute band, Archagathus, sound, well, a lot like Agothocles with more upper register screams. The Canadians will ever be accused of being innovators as they mince their way through four songs, but their side of this 7-inch is serviceable and enjoyable. “Land of Filth” features some unexpected tempo changes and it’s hard to quibble with a catchy blastfest like “No Help.” The guttural roar becomes a tad monotonous during long intervals between screams on a song like “Vomiting Idiocy” but that’s far from a fatal flaw.