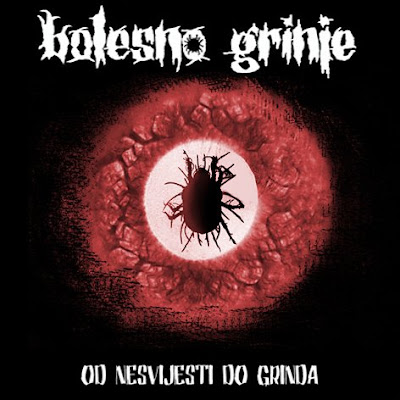 Bolesno Grinje
Od Nesvijesti Do Grinda
Cryptas/Endless Brutality of Men
2003
Translation is never an exact science. For instance, Metal Archives tells me this Croatian band’s name roughly translates to “Sick Mites” in English. After several years of intensive study and consultation with the foremost experts in the field, I’ve determined a more accurate translation would “Scrotum Snapping Terrorizer-core of the Highest Order.” Or something to that effect.
If they bring a mite (ha!) more hardcore to the proceedings than the Terrorized ones, that just adds piquancy and shields Bolesno Grinje from the charge of being clones. The Max Cavalera roaring also separates the Croatians form the grinding hordes as well.
Though the blasts may not be as fast as some of their European contemporaries, but Bolesno Grinje can rock it with the lightning strike guitars of “Proljev,” the counter-clockwise pit-winder of “Uvijek Ista Prica” or the rasping metal-file-on-bone bass tone of the gruesome “Error.” For those who like a little booty shakin’ with the blastin’, there’s the grind’n’roll shuffle of the wolf-howled “Jebenise.” Front and center to it all, though, is the trepanning with a d-beat drill bit “Jedan Dan.”

I may not have a damn clue what Bolesno Grinje are talking about, but their music speaks my language. Grindcore: the Esperanto of the metal world.
Posted by Andrew Childers at 4:26 PM

I searched this band on amazon and it brought me "bolero grinder and salt shaker." Not a grind band liked I hope but an actual salt and pepper shaker set. Now I have to check this band out.

I have their most recent release Krvave ruke-Krvavi novac, and it also is a fantastic album. I always have a higher level of respect for bands that don't cave into anglicising themselves.

Yup, Grinje grind fairly nice. They're the most popular Croatian grind band, I guess. They played at our place in Rijeka once, too. Not bad live. :D