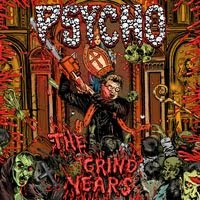 Psycho
The Grind Years
Selfmadegod
Stop me if you’ve heard this one before. The geezer of your acquaintance – usually a Baby Boomer, perhaps a parent or grandparent – subjects you to an endless tirade about how much more awesome music was when they were young and how everything today sucks ass. Safely ensconced on a throne of gauzy nostalgia and perhaps the early onset of Alzheimers, it’s easy to pretend everything used to be so much better way back when (thanks, Christianity, and every other religion with a fall from grace story). Hell, I’m sure we’re all guilty of it too, pretending every first run grind band had been knighted with a tap from Mick Harris’ drum stick.
Luckily, Boston’s early ’90s punks Pyscho (whose credits included a spot on the infamous Bllleeeeaaauuurrrrggaaah! comp) are back with a discography that sounds like a fuzzy Xerox of Repulsion’s early, Genocide-d thrashy grind to disabuse us of any misplaced nostalgia. There’s nothing wrong with Pyscho’s loose-limbed attack in and of itself. It just happens to be thoroughly forgettable in spots and suffers from the inconsistency inherent in most discographies. The vocals have an odd GWAR tinge at times and whammy bars get thoroughly abused. When it works, as with the bass-lead “Equality-Ecology,” it’s an enjoyable stroll down memory lane.

However, memory lane is in desperate need of a repaving job because the cracks are fairly evident. The band’s pop culture targets – Led Zeppelin, Garth Brooks, and assorted ’70s and ’80s cock rockers – seem dated and, let’s be honest, too easy to be worth the effort. The two second scatology bursts of “Sore Scrotum,” “Crushed Genitals” and “Sore Rectum” just don’t pack the shocking punch they once may have held, either.
The Grind Years is a decent, if rather average, compilation by a band that I’m sure was probably decent, if rather average, during their prime. I’m not going to pretend it’s some lost classic, but it kills an hour and it’s a piquant reminder that grindcore was not immaculately conceived. There were a lot of casualties and a lot of also-rans along the way.
Posted by Andrew Childers at 7:51 AM

four of your bakers dozen are from the 80's, another 3 did their best work before '95 and not a one of them formed before 2000. you can't hide from the truth.

Average is enough for me, and also " fuzzy Xerox of Repulsion’s early, Genocide-d thrashy grind" has also sold me.

well anon, i'd say gridlink, insect warfare, graf orlock, sayyadina and wormrot do pretty good representing post-millenial grind. the only thing keeping them off the list is time. the list may have to be updated in a few years.

Yeah... all of the mentioned bands own. New grind rules.