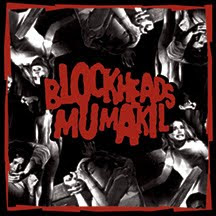 Blockheads/Mumakil
Split
Relapse
Put me in front of a keyboard and I’m normally a pretty verbose dude, but I’ve been sitting on this second meeting between these two evenly matched Eurogrind pulverizers for about four months now trying to figure out what to say about an album that’s serviceable, a nice snapshot of two decent bands doing what they do decently and is pretty much exactly what you’d expect from them with no frills or frippery. Can you see why I’ve been stumped? What do you say about that? So thanks to Impure Lard for prodding me up off my ass.
It’s seven inches of France’s Blockheads colliding with Switzerland’s Mumakil. They play fairly similar styles of straight ahead grind. They both do it pretty well. Relapse put their coin behind this EP so the sound is clear without being pristine and sterile.
I don’t know who pissed in Xav’s ratatouille but dude sounds like he’s ready to cram Freedom Fries under your finger nails as rails his way through Blockheads’ “Famin,” bellowing until his lungs damn near burst. Where the French institution really shines, however, is on the anthemic “Follow the Bombs,” which rocks martial tempos and triumphant guitar arrangements.
Flipside, Mumakil have once again been chugging the blastahol on their three selections, like the scathing “Wish You the Worst.” For anyone who was disappointed in Behold the Failure’s lack of songwriting variety, unrelenting blasts of “No Warning” and “Doomed” work much better in this limited format.
Of the two, I’d definitely score Blockheads as the better band, but over all this is a perfectly enjoyable split. If you’re unfamiliar with either, this makes a great taster platter to familiarize yourself.
Posted by Andrew Childers at 7:02 PM

This release is pretty much perfect as it's just relentless the whole way through. Thanks for the link by the way!

That artwork is dope, its plain but reminds me of an old Night of the Living Dead poster my dad made me take off my wall as a youngin'. Blockheads always kill it! Gotta pick this up

Both bands are pretty good, although this is their second split together, the first back in 2006 also had the band "inside conflict" doing a cover of ND the world keeps turning, cant seem to find it anywhere though.

"Decent band doing what they do decently" is a tidy summation of my feelings on Mumakil's entire career to this point.

It'd be too much to ask for "Follow the Bombs" to be a Gravity's Rainbow reference, wouldn't it?

damn. now you've put me in a pynchon mood.