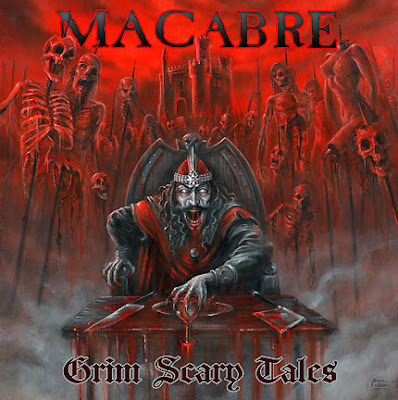 Macabre
Grim Scary Tales
Willowtip
Anyone who has ever sat down with an unexpurgated copy of Grimms’ Fairy Tales knows the Helen Lovejoys of the world constantly screeching about children being exposed to sex or violence are full of shit. Violence is an intrinsic part of the human experience and there was a time when children were not shielded from those (*ahem*) grim realities.
Having sung the praises of pretty much every twisted, murderous maniac of the 20th Century, Chicago “murder metal” (their term for bits and pieces of thrash, grind and death) purveyors Macabre go digging through their history books on fifth full length Grim Scary Tales.
While Macabre have long drawn plaudits for a 20 year streak of consistently enjoyable if not necessarily essential serial killer grooves on albums like Dahmer and Sinister Slaughter, Grim Scary Tales shows the band crafting some of its most clever tunes to date, exploiting a globe’s worth of musical styles to make their rhetorical points from the itsa-me-Mario pizza hall bounce of “Nero’s Inferno” to the plaintive faux ballad strains of “Mary Ann” or the jarring juxtaposition of the nursery rhyme cadence of “The Big Bad Wolf” with its sinister lyrics. Along the way we’re treated to songs about a host of bloodthirsty historical personages such as Gilles de Rais (of “Enter Crypts of Rays” fame), Burke and Hare and a by the numbers cover of Venom’s “Countess Bathory” to complete their pokemon collection of historic maniacs.
Grim Scary Tales is another decent but not mindblowing collection of murderous mayhem from an often unheralded band of bloody minstrels. If you’ve never indulged before, this is just as good a place as any to get acquainted with their sanguinary distillation.

I don't think I need to talk about how much I love Macabre. I need this CD, I'm slacking.

i met corporate death after a show several years ago. guy is probably one of the coolest people in metal. he spend a good 30 or 40 minutes after the show just hanging out and talking to people.

I've heard that they're neato guys and I think it's cool they're stills swingin'...but their music has never done anything for me.

Hope it works out, anyway.

I was just having this conversation in another forum!

I stated that, as a general rule, I liked it when death metal bands were frenetic more than groovy.

Then someone reminded me I boner over Asphyx. And then they pointed out my love for Down and Pantera (not death metal, but there's a point (and yeah, Pantera, because I can do a lot of pushups)).

My problem with Macabre isn't their groove. On paper, I really should dig it. For some reason this article made me dig out some Deceased, though, so everyone wins!

This album is the most fun of anything I've heard this year. Great stuff.