And thus, through the serene tranquilities of the tropical sea, among waves whose hand-clappings were suspended by exceeding rapture, Moby Dick moved on, still withholding from sight the full terrors of his submerged truck, entirely hiding the wrenched hideousness of his jaw. But soon the fore part of him slowly rose from the water; for an instant his whole marbleized body formed a high arch, like Virginia’s Natural Bridge, and warningly waving his bannered flukes in the air, the grand god revealed himself, sounded, and went out of sight. Hoveringly halting, and dipping on the wing, the white sea-fowls longingly lingered over the agitated pool that he left.

Herman Melville
Moby-Dick or, The Whale
1851 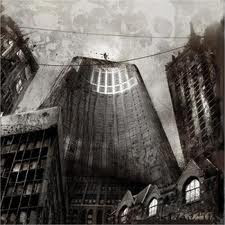 Maruta
Forward Into Regression
Willowtip
Forward Into Regression has been my white whale for the better part of the year. The travails of my futile hunt for Maruta’s latest effort are probably only of interest to myself, but I have stalked the land like Ahab in his mad quest for Moby Dick until Mitchell Luna kindly relieved my suffering.
The Floridian’s sophomore power violence-mauling-grind in a drunken party brawl effort is a stronger, more confident distillation of everything that made In Narcosis awesome. There’s a definite upward swing to their growth. The signature slouching guitars have a 3D depth and the new rhythm section (complete with bass!) doesn’t alter their wonted sound. Instead, much like GridLink’s lineup shuffle pre-Orphan, it gives the band a larger platform from which to stage their assault. In Narcosis has been run through a rigorous bootcamp the last few years and Forward Into Regression has come out more toned and muscular as a result.
Both “Stagnation Routine” and “Salient” boast are a more focused deployment of Maruta’s penchant for slow parts without stalling the album’s momentum. The knuckle draggers now feel purposeful and pointed, like a knife twisted in your ribs to prolong the pain. If there’s only one misstep on Forward Into Regression, it’s that “Failure King” rides a single musical notion too hard for an interminable three minutes. However, that’s easily overlooked considering the closing body blows of “Gaiares” and “Blood of the Luddite” quickly right the ship.
Once I landed this white whale I immediately trucked it over to the local taxidermist so it could be stuffed and mounted on the mantle among my other trophies. As of today my 2011 top 10 list has a mathematically improbable 13 albums on it. Somebody’s about to get bumped to make room for Maruta.

[Full disclosure: The band provided me with a review copy.]

Posted by Andrew Childers at 8:11 PM

One of my favorite albums this year for sure. I really like the instrumental track, which is kind of weird for a grind album.

It's definitely a top-15 year, dude. I have so many grind entries alone on my list, and I'm sure there are at least one or two surprises in store for us before my next birthday (New Year's.)Just saw Maruta last week in Chicago with Gridlink (!) and Phobia, they put on a very nice show. I took for granted the pit-forming power of their chugging parts, and got knocked on my ass for my foolish error.

Glad you finally got a copy! Great fucking album.

Also, Mr. Veins, that sounds like a badass show!

the drumming on this album is the business. dude can play for any band.