He closed his eyes.
Found the ridged face of the power stud.
And in the bloodlit dark behind his eyes, silver phosphenes boiling in from the edge of space, hypnagogic images jerking past like film compiled from random frames. Symbols, figures, faces, a blurred, fragmented mandala of visual information.
Please, he prayed, now—
A gray disk, the color of Chiba sky.
Now—
Disk beginning to rotate, faster, becoming a sphere of paler gray. Expanding—
And flowed, flowered for him, fluid neon origami trick, the unfolding of his distanceless home, his country, transparent 3D chessboard extending to infinity. 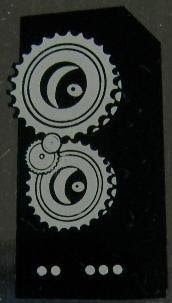 Various Artists
Noise vs. Subversive Computing
Computationally Infeasible Records
To attempt to review Noise vs. Subversive Computing in any sort of traditional context is an exercise is Sisyphean futility that would make Albert Camus nod in stoically absurd appreciation. What you get out of this power electronics/computer programming/performance art circus on a jump drive is ultimately going to be so subjective as to render any sort of critical discussion moot if not utterly pointless.
Pascal Cretain, who some of you may know from his comments here, has wrangled together 10 noise musicians with 10 “subversive technologists,” asking them to provide him with something that represents their interpretation of the modern internetted world. It is the logical outgrowth of the musical hactivist skullduggery advocated by Creation is Crucifixion years ago but never fully realized.
While all the music contributions are noisey in the way you’d normally expect, it’s the multimedia projects that at least attempt to bring something new to the table - or keyboard. Contributor Gorrrgar serves the bit map image “My Kind of Shithole” that alternates photos of buildings in Bucharest with the insane coils of cable that are “omnipresent,strangulating the city aesthetically, but connecting three millions of brains.” It’s one of the more fascinating observations involved. Cretain, himself, chips in the video “Information Pollution,” which strobes a stream of random images at epilepsy-triggering rates against steadily building layers of vocal samples and eventually outright power electronics noise in an effort to make tactile the sensation of our modern information overloaded society. While it certainly builds to a claustrophobic finale, it is a bit of a one trick cyber pony.
As with any projects of this type, the danger of pretention is ever present and plenty of the contributors belly flop right over that line with abandon. Contributor E’s “Sifting Through the Noise” is a bad attempt at a postmodern/deconstructed narrative of Reagan and the internet that ultimately collapses under the weight of its own smug self satisfaction and faux postmodern fractured, recursive narrative.
Unfortunately, other web-based contributions are already down, shortening the promised experience. Which ought to teach me to start moving faster in the future. Also, since all of the projects are contained within their own folder on a jump drive, navigating between one application and the next is a bit clunky and awkward, which can mitigate your enjoyment a tad. If this sounds like your thing, give Pascal a holler and immerse yourself in his Wonderland world of the web.