You Grind…But Why?: Jon Chang

In the spirit of Napalm Death’s micro-song masterpiece “You Suffer,” I recently decided to micro-interview some of my favorite musicians to find out how they discovered grind, what they get out of it and why they feel compelled to blast a beat. The interviews, essentially, boiled down to a single question: You grind…but why?
I could think of no better person to start with than the guy who singlehanded has done the most to expand my notions of what grindcore is and can be, forcing open my musical and emotional vistas with all the subtlety of a tactical nuclear strike during his tenure with Discordance Axis, GridLink and Hayaino Daisuki. Ladies and gentlemen: Jon Chang. 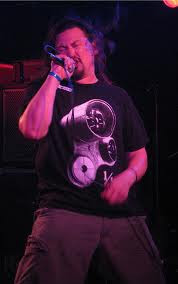 “What got me into the style was the raw, all out emotion of the sound,” Chang said. “I've been attracted to things that ride the line between catastrophic and cathartic since I was very young, from the books and anime I liked to the music and games. When I started writing and making music, I only knew that I wanted it to be relentless, more like a pulp novel than the Great American story if you will.
“As I get older, I try to figure out what I can bring to the table that won't compromise what it is I liked about the sound in the first place. For me, every record is like another book in a series where you've got characters with history that people relate to, but to keep it interesting you have to explore new ground with them. With every new piece, I am pushing for hooks and angles, without shedding the momentum.
I don't want to ‘change it up’, i.e. ‘water it down.’ I want to make records that take the intense concentration of a bullet hell game, the hooks from Ennio Morricone and J-pop metal and set them to an unrelenting future robot war and then push it out at 1000 miles per hour.
“If we can pull that off, I'll think of something else.”
Posted by Andrew Childers at 9:06 PM

there was a notable lack of sexroids.

What the hell, Jon?

This is a great idea, I wish I would have thought of it, haha

glad you like it cuz i have two months of these in the can and ready to go.

I look forward to Takaho from UG! nice feature

I like the way that Asian man thinks.
Hope I don't bum him out too much though ;p

I agree 100% with Chang. hearing Scum for the first time was more about my elevated blood pressure and need to jump around than anything particular the band was doing.