You see, I’m no good as a clergyman. I put my faith in an improbable and private image of a fatherly god. One who loved mankind, of course, but me most of all. Do you see, Jonas, what a monstrous mistake I made. An ignorant, spoiled and anxious wretch makes a rotten clergyman. Picture my prayers to an echo-god who gave benign answers and reassuring blessings. Every time I confronted God with the realities I witnessed he turned into something ugly and revolting. A spider god, a monster. 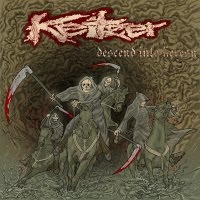 Keitzer
Descend into Heresy
FDA Rekotz
Keitzer do not “descend” into heresy on their latest death-grind smartbomb. That’s far too demure and passive of a verb for the German (and Portuguese) band’s terminal velocity body slam into the depths of religious negation on the follow up to 2008’s impressive As the World Burns. If you think of that prior album as the launching pad of a musical intercontinental ballistic missile, then Descent into Heresy is the concussive end of the trajectory, submitting to the lethal tug of gravity’s rainbow as Pynchon would put it.
Keitzer continue to churn out the complete, devastating album experience that seems to elude Misery Index. Grind and hardcore sensibilities get welded to a tank chassis carjacked from Bolt Thrower’s military surplus auction. It chugs and rumbles, feasting on a sulfurous diet of pure petroleum, belching noxious, toxic rage clouds as it burns across the countryside. Album superlative “Wrath” whirls like a death-spitting gatling gun. “Your Last Days” flattens the landscape with a cluster bomb barrage of devastating bass wastage. Then there’s "Chains," which probably typifies Descend into Heresy’s slavering maw: The song swarms like a kicked hornet’s nest until it all gets devoured by an iron-plated, Mothra-sized monster sporting an antique Pickelhaube and a Teutonic passion for precision-dealt death.
As the World Burns was just as pyrotechnic as its title suggested, but Descend into Heresy feels far meaner. There’s an abrasive, aggressive nihilism at work that crushes their competitors. This is the benchmark for death-grind in 2011.

[Full disclosure: The band sent me a download.]
Posted by Andrew Childers at 7:28 PM

I had a Mothra-sized tent pitched after hearing this beauty! Great review!

First heard them on the Nasum Tribute release and was greatly impressed, was on edge if this was worth buying or not, given my renewed minuscule record budget, but your review has prompted me to do so, if I am not happy let it rest heavy on your conscience Mr. Childers!

can you taste the hints of exhaust from trains daily passing the vineyards? sorry, with all the descriptors i thought this was a wine tasting blog :)

amalgamated, i once claimed to be a grindcore sommelier. soooooo.... maybe?