Blast(beat) from the Past: Insane Assholes 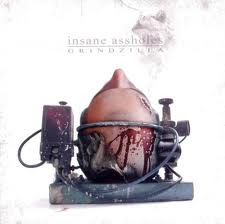 Insane Assholes
Grindzilla
Subordinate
2005
If Fallout: New Vegas has taught me nothing else, and I have no cause to doubt the veracity of its prophecy, I know the post-apocalyptic West will be overrun by gangs whose dedication to a costume theme would do The Warriors proud. Among the uniformed thugs will be a bunch of Elvis-worshipping hoodlums running around dressed as Jailhouse Rock extras, and I’m guessing they may trace their genesis to Insane Asshole’s Grindzilla.
I have the anonymous commenter on the Letter G mixtape to thank for turning me on to Italy’s not-Cripple-Bastards grindcore exports Insane Assholes, a playful amalgam of expected grind and unexpected straight up old timey rock.
The lip curling Elvis attitude and pelvic gyrations bring a welcome flair, but don’t let that fool you into thinking Insane Assholes wander too far off the grindcore nature preserve. This is an album that manages to violate both the Grindcore for Dummies and Sound the Alarm rules before you crack the introduction, but when they hit that sweet spot, Insane Assholes are a joking blending of bad Evil Dead references and other B movie detritus that justifies their retarded name. “You Make Me a Monster” and “L’Infero Di Ash” rock a delicious burr to their guitars, liked a six stringed Scottish brogue run through a screaming tube amp, divebombing around Dino with rabies screeching.
Insane Assholes are not afraid to allot two or three minutes to a song, letting it expand and stretch out like my lazy ass cat on the white velvet couch I just spent an hour de-furring. But sometimes that indulgence conspires against Grindzilla. In fact, at 29 songs and 42 minutes, a little Insane Assholes goes a really, really long way. Especially the six minute plod of “La Fine,” which fakes a bad Black Sabbath groove and rides it to death.
While the rock 'n' roll swing is a surprise treat, there is not going to be much else that will catch a cagey grind aficionado unawares. However, taken in small doses, Grindzilla can be a thrill.

Posted by Andrew Childers at 8:26 PM

Haha, what a name!

I got a phone call in college which was from my wrestling coach. I thought it was from a friend of mine. I answered, "What's up you insane asshole?!?"

Luckily, he just thought it was funny.

haha i know 206 - he's the guy that sent me here. that bastard fucking loves these guys. he calls them suffering mind with adhd.

I checked their Myspace and they're not bad. The song "Debiru" sounds like the Napalm Death cover of "Who Sets the Rules" by Sick of It All, so that's confusing but fun.

your honor, my client pleads temporarily insane asshole. it worked for oj and casey anthony, right?

I know you are joking, but that makes me barf out of my nose.

pix or it didn't happen.

But as someone who actually has a client on whose behalf I am pursuing a "not guilty by reason of mental disease or defect" plea, the whole "plead insanity" stuff makes me pukey.

It's the same reason I can't watch stuff like Law & Order (actually, the vanilla show is ok in very small doses, if I hold my nose).

On-topic: I was thinking about bands incorporating rock 'n' roll into grind yesterday. Catheter with their stoner swing moments and CSSO with their Grindy Hendrix shit came to mind as the best I've heard. I will give these guys a spin, too, though.

Love the grind and roll vibe that Blood duster pulled off had the right amount of swing and heavy, will be sure to check this out.

haha sorry to set you off bill. i actually thought the emphasis was more on the "assholes" than the "insane" part. damn interwebz and lack of verbal irony.

Sarright, I was just temporarily being an asshole!