Blast(beat) from the Past: Nuclear Winter 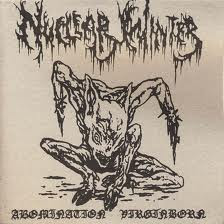 Nuclear Winter
Abomination Virginborn
Blastbeat Mailmurder
2003
Greek duo Nuclear Winter sound like they’ve been slinking up the same left hand path and chanting the same ultimate incantations that have long driven Entombed and Vader on this 7-inch of old style death murkiness. Another shoot growing off the StraightHate/Dephosphorus family tree, Nuclear Winter paid tribute to the past masters of dismal death over the course of three songs.
Unlike a lot of death metal, which insists on unremitting brutality and technical acumen, Nuclear Winter recognized that atmosphere was often a more important component. The band is perfectly comfortable cranking along at cruising speeds with the top down, enjoying the feel of the wind in their hair. They up the tempo to an organic blastbeat only as an accent rather than the spine of the song. That means they rely on the authentically charnel old school guitar tones to carry the songs. However, there’s a thinness that make the lack of a second guitar or bass palpable. With the added texture additional instrumentation would have provided, these three songs would really crush. But Nuclear Winter make do with what they have available. There are no drum triggers, the blastbeats sound human, the riffs chainsaw, the art is suitably Hellhammered and the guitars are full of those pinched squealy sounds. This is death metal the way I remember it.