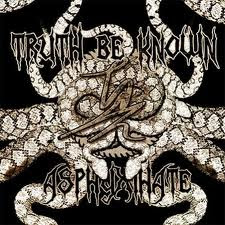 Truth Be Known
Asphyxihate
Mourning Sound
I, apparently, have a bit of a potty mouth because at least once or twice a month Blogger’s stat tracker informs me that somebody searching for “punishment fuck” mistakenly finds their way here. But not even my prodigious proclivity for profanity can compete with Singapore’s “beer grinding death” band Truth Be Known who devote a good chunk of their 18 minute EP to telling people to fuck off and how to go about doing it.
I was able to ponder their four letter acumen because, unfortunately, my mind wandered throughout their nine song trip through Bolt Thrower’s back cataloge by way of rock and roll swagger. Things start off strong with the thrilling sustained guitar notes and martial pounding drums of opener “Men in White,” and all 25 seconds of “Sucks to Be You” is a stilettoed goose to the kidneys. But I never felt like Truth Be Known ever showed me more than those early flourishes. Take for example, “Rock and Roll Baby,” a death-vocalled stab and ’80s styled punk rock complete with declarations that “I’ll live my own life with no fucking regrets” (because it had been at least 30 seconds since they’d carpet F-bombed you) that degenerates into an overly familiar drum breakdown married to a riff that sounds like it was lifted from “Caught in a Mosh.”
Truth be known, I’m sure Truth Be Known would probably do a great job whipping up a pit while you wait for the headlining bands to play, but Keitzer already rules this turf this year.
[Full disclosure: The band sent me a download.]
Posted by Andrew Childers at 7:42 PM

great. now i gotta dig out that harmony corruption cd...