Women’s lack of rights has nothing to do with not being allowed to vote or to be judges – those matters don’t constitute any sort of right. No, it has to do with the fact that in sexual relations she’s not the man’s equal. She doesn’t have the right to avail herself of the man or abstain from him, according to her desire, to select the man she wants rather than be the one who’s selected. You may say that would be monstrous. Very well. Then the man shouldn’t have these rights, either. The way things are at present, the woman is deprived of the rights possessed by the man. And, in order to compensate for this, she acts on the man’s sensuality, forces him into subjection by means of sensuality, so that he’s only formally the one who chooses – in actual fact it’s she who does the choosing. And once she has mastered this technique, she abuses it and acquires terrible power over men. 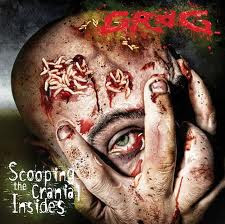 GROG
Scooping the Cranial Insides
Murder Records
I’m always am/conf-used by porno/gore bands that thank their wives and girlfriends in the liner notes. I try to imagine how I would react to having songs about gang rape and bukkake dedicated to me, but it’s a wonderfully bizarre world and I’m sure there’s someone out there who finds it flattering. Assuming the Sofia that GROG-ster Alexandre Ribeiro thanks “for what was, what is, and what shall be” in the liner notes is the same Sofia who contributes orgasmic groans to the rectal violation tale “Anal Core,” I’m just going to concede that Rule 34 is still in effect and then try to scrub that image from my cortex.
Portugual’s GROG grind with a brutal death edge (the chestburster vocals and unrelenting/monotonous double bass) and they wouldn’t be half bad if they weren’t perverting all that talent in services of songs named “10 Cummandments,” “Sphincterized (Materialized in Shit)” and “Hanged by the Cojones,” which comes closest to something identifiable as humor.
Because the band clearly has the chops to aspire to better. Witness the opener “Toia Mai,” a Maori tribal chant/percussion number that sounds like something Sepultura or Neurosis would have experimented with in the 1990s before exploding into first true song “Beyond the Freakish Scene,” a slippery sinuous slash of grind and death pounding. But the retardedly juvenile lyrical detritus and a bit of same-iness to the songs (just about every one ends with the same resonating cymbal crash) does wear over 37 minutes.
GROG can blast with the pack and can bust out a decent tune (“Acephalic Meatgrind Orgy Hibernation” sneaks and snarls in a way that sets it apart from the album’s all-blast ethos) and that best that can be said about their lyrical content is that the vocals render them completely unintelligible.

[Full disclosure: The band sent me a review copy.]

Posted by Andrew Childers at 8:11 AM

didn't regurgitate already do something like that or am i hallucinating again?

Hmm, maybe on a split, because I mostly concentrate on their full lengths, but the aesthetic is definitely a familiar one to the genre either way. I just left this review feeling like they really lacked a sense of humor, which is weird for a goregrind band, and I was thinking about the title and that just popped into my head.