You Grind…But Why?: Richard Johnson

When people call Richard Johnson the Grindfather, they’re not bullshitting. The guy kicked off the drum machine grind phenomenon with the legendary Enemy Soil (midwifing two-thirds of Pig Destroyer in the process), helped drive the sound to perfection in Agoraphobic Nosebleed and can also be spotted getting his grind ’n’ roll on with Drugs of Faith. Johnson has been a pretty integral fixture in modern grind’s evolutionary sweep and ensures its vitality by quietly mentoring young musicians as well. So I was especially interested in hearing his back story. 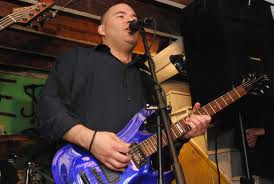 “I started getting into metal, HC and punk in high school,” Johnson said. “I was less into escapism like comic books and more into the extremes, and I felt that grindcore was more extreme than anything else. I also had a love for HC and punk that was a different love than for metal (death metal), and I could see grind was rooted in the former. Napalm Death became one of my favorite bands—well, in the top five, anyway.
“I used to have the Live Corruption VHS tape in my VCR more than any other video. Nuclear Blast, I think it was, had a cassette bootleg of the audio that they were selling in their catalog. Not the official live album, but the audio of the home video, interviews and all.
“The way I like to put it, and I think I took this from Wadge when that guy said it in my zine, is that sometimes you need a kick in the pants, and World Downfall by Terrorizer will do it for you. I love the feel of the blast beat married with crunching the three-string power chord.”
Posted by Andrew Childers at 8:11 AM

He's one of my favorite vocalists. Sounds totally whacko but is crisp. Very distinctive!

He's also probably the only grind-dude that wears button-up shirts that much. Which I think is cool.

richard johnson: grindcore office manager. the cool boss who lets you take off early on fridays.

"I love the feel of the blast beat married with crunching the three-string power chord" beautifully summed up. If I ever have to mention again in life what kind of music I enjoy, i'll repeat that phrase.

what is best in life? to crush your enemies, see them driven before you and hear the blast beat married with crunching the three-string power chord.

Richard Johnson is one my favorite people in grindcore. He's really supportive of upcoming acts, and seems really genuine in his love of agressive music. Not to mention that his 'side band' drugs of faith is really forward thinking, well crafted grindcore. I'm really glad they came out with a full length.