You Grind…But Why?: Jerry Flores

Some men are born to grind. Some pursue grind. Others have grind thrust upon them. That's pretty much the tale of Excruciating Terror and Bloody Phoenix guitarist Jerry Flores.
Excruciating Terror was one of those transitional artists in my life. Along with Phobia, they represented my first forays into grind beyond the obligatory Napalm Death/Carcass axis. Divided We Fall helped plunge me down the rabbit hole of grindcore, sparking a lifetime addiction. After Excruciating Terror’s dissolution, guitarist Flores kept the grind coming with current outfit Bloody Phoenix.
When I ask Flores why he chose the path of blast beats, his answer is just a pithy and concise as his songwriting. 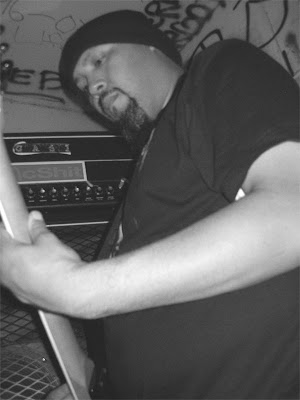 “I didn't choose grindcore,” he said. “What I was playing was considered grindcore once the term was coined. I just had a need for speed growing up listening to music. Always seeking faster music. You just end up playing what you like.”
Posted by Andrew Childers at 8:47 PM

Labels: bloody phoenix, excruciating terror, grindcore, you grind but why

I bought Bloody Phoenix because of your recommendation some months ago.

Fucking tits! I'll check out his other stuff, too. Very nasty.

old et stuff is hard to find. i can't tell whether pessimiser is an active label any more these days. but if you do, it's definitely well worth it.