You Grind…But Why?: Digby Pearson

There’s a pretty good chance that none of us would be here getting our grind on if Digby Pearson hadn’t stepped up to get the blastbeaten ball rolling. The Earache majordomo is directly responsible for bringing the first, defining wave of grinding goodness to the BPM-starved masses. Napalm Death, Carcass, Terrorizer and Brutal Truth all owe their careers to Pearson’s backing. Regardless of what you may think of his post-grind forays into other musical niches and the public falling out with many of those early bands, the guy was there and played a crucial role at a time when nobody thought there was even a market, let alone a name, for this stuff. So what got his grind gears growling nearly 25 years ago? 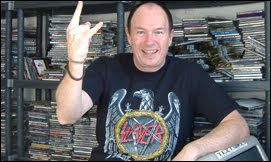 “The motive for what the bands created and what Earache supported in the early days was pretty much just to inflict the maximum NOISE possible onto the general public,” Pearson said. “Maybe even cause the demise of all ‘normal’ music, that would have been a bonus. I had some lofty, crazy ideas back then, to be sure, and was very single-minded and obsessive about it, even with scant resources.
“At no point was a recognised genre that would become highly popular envisioned. That was a laughable concept in 1986-8.
“People forget it was more or less avant-garde, highly experimental music during that explosive first couple of years. From Godflesh to Carcass, the motive was to warp minds.
“There were some ‘noisy’ atonal anarcho/HC punk bands around, even some extremely noisy indie acts...but Earache encouraged its bands to push the envelope way further into extreme metallised noise --and to hell with the consequences.
“Scum itself was described as ‘hyperspeed thrash’ by me on its release in 1987 (because thrash was the then-current most extreme form of metal).
“ ‘Grindcore’ first appeared as a genre description in September 1989 on the sticker on Earache’s Grindcrusher comp.”
Posted by Andrew Childers at 8:34 PM

Labels: earache, grindcore, interviews, you grind but why

This was great. its nice to have an interview with someone in a different (but very relevant) aspect of grind.