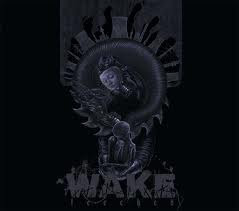 Wake
Leeches
Hearing Aids/7 Degrees
It's fun watching young bands grow up. Case in point, last year Calgary's Wake were like little hyperactive grindcore puppies, all boundless energy, floppy ears and too large paws on surprise 2010 standout Surrounded by Human Filth. A year later on debut full length Leeches and suddenly the band has grown into those oversize paws. Now that nipping puppy has some bite in his jaws when he uses your fingers as a chew toy. And play more often than not means putting on a seminar in grindcore drumming.
There's nothing overtly flashing about the drumming, but it's just so pinpoint and tasteful, shoved to the forefront so that it shows off Wake's growing confidence as a band. The drummer beats the toms on "The Means to the End" like they owe him money. It's a pounding reminiscent of Napalm Death's "Dementia Access." The tight snare roll of "Recycle the Sickness" is a small touch, but snaps through at the perfect point.
Otherwise, Wake are back with the same brew of death metal, grindcore and power violence jumble, just with more room to sprawl over the course of 14 songs. Set off by pristine Scott Hull production, Leeches sounds superb without being sterile. Hull allows the band to simply play, letting raw energy carry the commotion. When he does step in, like shoving the uvula-shattering screams of "Cult of War" into the limelight, it's a subtle but potent touch.
Less obvious than the precision drumming, however, is just how mature Wake's songwriting has become. They showed off an impressive array of skills on Surrounded by Human Filth despite only having five tracks at their disposal, and with Leeches they demonstrate they know how to play with texture and tempo across a full length, whether it's the sneaky melodies that seep into "Aversion," obligatory slow song "Leeches" or the way "Dive's" corkscrew riff slithers between hammer of Thor cymbal crashes. At nearly three minutes and poised at about Leeches' midpoint, "Dive" is an expertly placed breather that sets off Wake's more aggressive fare.
These grindcore puppies may be growing, but I hope nobody housebreaks them too soon.

[Full disclosure: Wake sent me a download.]
Posted by Andrew Childers at 7:16 PM

I love dogs (mine is the best/smartest/dumbest, just like everyone else's).

This album is awesome.

Hat-trick (that's what they call touchdowns in hockey, right?).