Those who have crossed
With direct eyes, to death’s other Kingdom
Remember us—if at all—not as lost
Violent souls, but only
As the hollow men
The stuffed men. 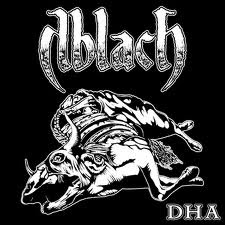 Ablach
Dha
Grindcore Karaoke
Scotland's Ablach no longer reside among the pale shades of the hollow men, having escaped the hollow, reedy production that was first album Aon's only misstep. The crusty grind sextet easily walk away with 2011's most improved award with second album Dha, a burly beast that revels in ferocious guitars and rasping Jeff Walker screams.
As if compensating for the tinny sound of Aon, Dha thrives on that essential sense of desperation -- that rush to make it through a 90 second song without losing the audience's attention -- that makes grind tick. Dha is a fat-free 13 songs (two are covers); all adrenaline, no filler. Right off the hop, "MacPhee" tattoos Scottish lore right across your cranium. But Ablach have also mastered the Terrorizer swing on songs like "From Tillydrone to Obliteration," which not only snarks Napalm Death but tells the tale of an impoverished swatch of the band's native Aberdeen.
Ablach covered Terrorizer last outing and this go-round adds faithful renditions of Phobia and Extreme Noise Terror. Ablach make no bones about being the sum of their influences, but their craftsmanship excuses any overt nods to bands of yore, and their much improved studio presence already has me excited for the inevitable Trí.
Posted by Andrew Childers at 8:20 AM