Turkey's Sakatat rule and rule hard. That's really all you need to know. The trio won me over on the strength of a four song tour promo CD that destroyed your average band's most polished effort, and now I'm a slavering fan for life. For a band that writes some of the most amazing, concise grind perfection around, vocalist Semih O. will wax rhapsodic about the style at great length given half a chance. If you don't want to blow of holiday plans with your family and thrash in the basement with friends after this, you probably don't have a pulse. 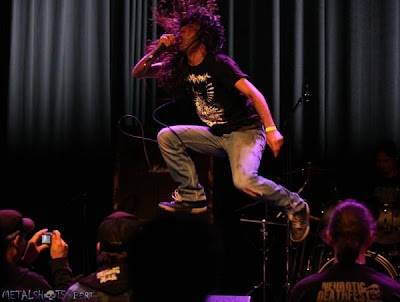 "We barely had any access to decent metal where I grew up, so during my childhood I would listen to basically anything I could get my hands on, whether it be some local metal band or first two Carcass albums on a dubbed tape which is how I got to know grindcore," Semih said. "However, it would take me a while to actually appreciate it. I think I was in high school when I got this Napalm Death VHS from an older metalhead, and I remember watching it back to back, over and over again. Around the same period, I happened to receive tapes and records of bands like Agathocles, Grossmember, Rot and plenty of other obscure underground bands, and all of a sudden grindcore has become the thing. Until then I (and everyone around me) was mostly into death metal and other genres of metal (which I still am) but all those bands introduced me to the other side of the fence which, in a way, was rather punk than metal. So, it is safe to say it was actually grindcore that made me aware of the fact that there is also a huge punk/hardcore scene out there to dive into, but that is another story. I don't remember actually thinking about it back then, but I guess grindcore has had everything I liked about metal (extremity, brutality) minus pretty much everything it lacked of (political awareness,some kind of sloppiness that I actually enjoyed, the DIY attitude etc...).
"Back then I'd been playing the drums for years already. However, all I have been doing since the 6th grade was to spend my weekends rehearsing with local metalheads of my age just for the sake of doing it. So, as soon as I graduated from high school, I spent the summer working and eventually bought a drum-kit and the first thing I did (even before tuning the drums, haha) was to convince my high school desk-mate Onur to record the four punky grindcore tunes I had came up with down in our basement of which two ended up being on our spontaneously formed band's demo that would be called K?sa ve Çi? (Short and Raw).
"Getting into and playing grindcore for me was a pretty spontaneous occasion, however what kept my interest fresh in this humanly non-normal and occasionally lo-fi and raw noise have been the feeling that made me wanna tear my clothes off and smash my head on the monitor, the politically-aware attitude that came up with the noise and the fact that I could even release my outrage against the social and political oppression of the daily life through the bullshit lyrics that we would bury within the short and fast tunes we came up with. Throughout years, all the people we've met during our tours in faraway countries, the bands I've got to see at DIY shows and listened to on the black wax also proved that this wasn't a fad but more of a life-style or at least what would eventually become a big part of my life. And I guess that explains why I [would] rather meet my bandmates to record a new 7" (and consume whole lot of tea before, during and afterwards) than spend the weekends with my parents in my hometown, went on tours in fuck-knows-where [rather] than go on a vacation or more recently, cancelled my trip to the seaside so as to save some cash for the new records that came out this year."
Posted by Andrew Childers at 7:31 PM

Labels: grindcore, interviews, sakatat, turkey, you grind but why

Sakatat are unbelievably brilliant, at times I wonder who I prefer more out of them and Wormrot (Wormrot only win by a margin), but the gap is closing. Napalm Death lack the old school style and clout they once had, and Agathocles arent aggressive enough anymore, but thats ok, because Sakatat are here.

These guys do, in fact, rule.

Also, "desk mate?" For some reason that stood out to me. I imagine they have some oversized desks that two guys sit at?

If that's the case, I wonder how much of the joy that is Sakatat do we all owe to a Turkish high school seating chart?

if sakatat could get a full length out, they would blow some people good and fucking away. i'd say the wormrot-sakatat-looking for an answer axis is pretty much ruling the traditional grind sphere right now.

i have the illegal grinding comp and their split with mesrine on to live a lie. all quality tunes.

not a fan of the other triumvirs though: i voted for gride and plf for consul.